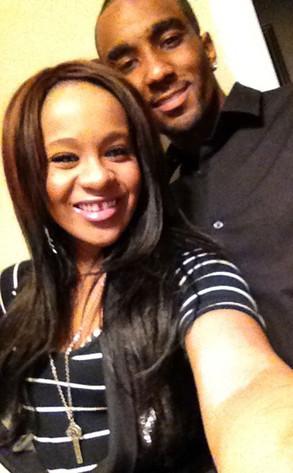 Whitney Houston’s Bobbi Kristina Brown is reportedly distancing herself from her father Bobby Brown by changing her name to Kristina Houston. Her mother was married to Bobby for 14 years, and there have been reports that he physically abused Whitney during their marriage. They also took lots of drugs together. Bobbi Kristina reportedly told her friends that she’s been wanting to change her name for years, but her mother wouldn’t let her. Right now nothing’s been made official, and there’s no clear estimation of when a legal change will be made.

Bobby Brown left Whitney Houston’s funeral before it began because they refused to seat everyone he brought, and he was entirely left out of Whitney’s will.

There have also been reports that Bobbi Kristina is romantically involved with her “step-brother” or “adopted brother” Nick Gordon, some reports even saying the pair are engaged, but Nick denies that they’re an item, telling ABCnews “We’re just close — just going through her mom’s passing and grieving together.”

Kristina and Nick are not actually blood relatives, her mother took him in and raised him as a son, or a “God son” 10 years ago, after she found out his mother was unable to raise him.

“Yea we got a little closer and what!!!… All the haters that dont know us or th real story can’t un follow me. I don’t give a f–k. I’ve proved my loyalty to her and the Houston family. I don’t owe any of you anything. Ha I don’t even know y’all haters….Some ppl have no lives so they gotta be in ours.