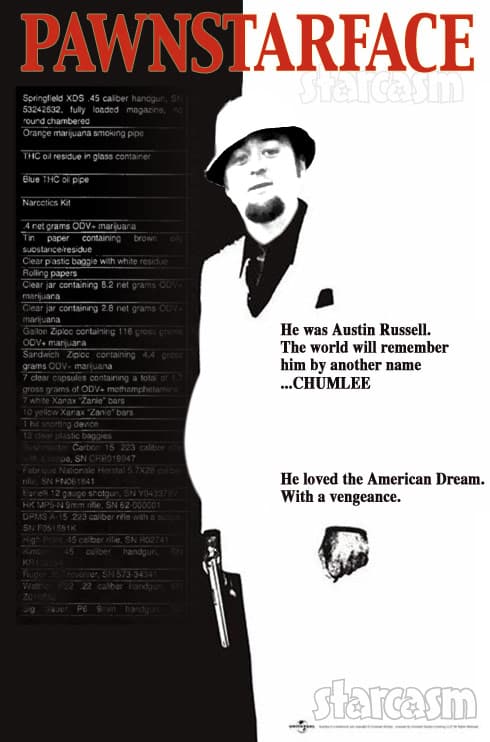 Lovable Pawn Stars lackey Austin “Chumlee” Russell was arrested last week after police officers searched his home as part of a sexual assault case and found illegal drugs and weapons. Police have released a detailed list of items found during the search, which includes numerous weapons, meth, a TON of marijuana, and a couple items with “white powdery residue” found in the “‘Chum Chum’ room with dance pole.”

The volume of weapons and drugs found is similar to those one might find at a drug dealer’s home, but Chumlee reportedly told police that his isn’t a dealer–he just takes the Costco approach and buys in bulk.

Speaking of bying in bulk, according to TMZ, “cops seized 12 firearms” during the raid, but “only 4 were registered to Chumlee.” A dozen guns + drugs + in-house stripper pole + Las Vegas = trouble waiting to happen! I’m sure The Old Man would agree.

Here is the complete list of items in the police report and the location where they were found. Oddly enough, the list not only includes the weapons, drugs, and drug-related items, but also a random T-shirt and bed sheet? Perhaps they had a suspicious substance on them that later turned out to be something other than drugs?