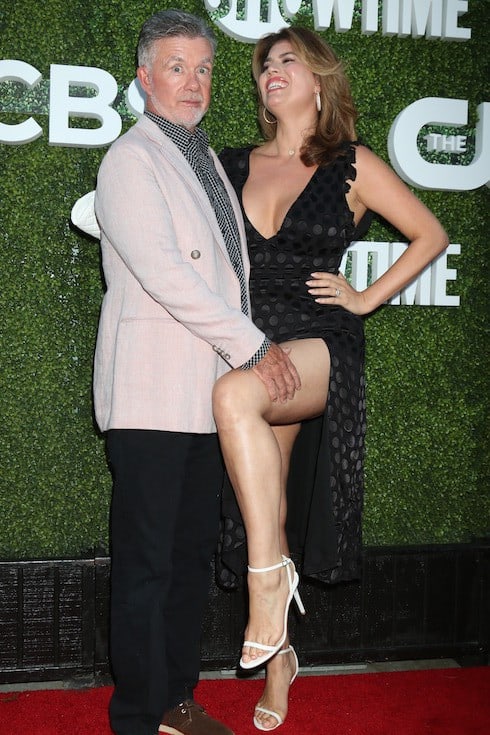 Who are Alan Thicke’s wives? It’s a common question–and understandably so, given the esteemed Canadian’s long and active life onscreen…and his even longer, more active love life. As his hit reality-sitcom Unusually Thicke readies its new season, we’ve put together a list of Alan Thicke’s wives for your perusal, complete with photos and bios for each. 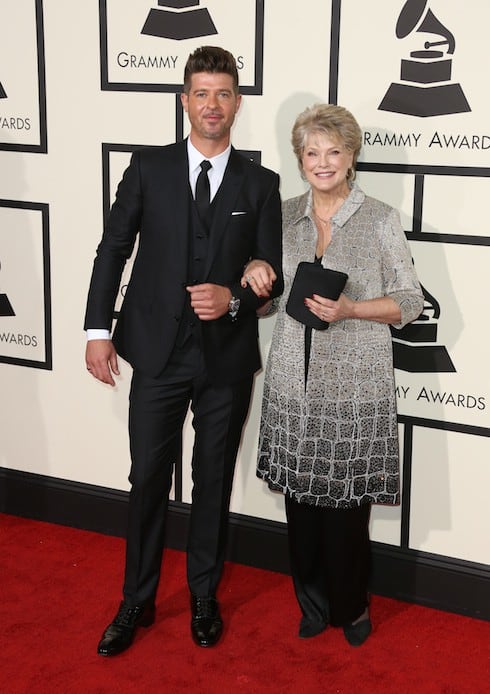 Wife #1: Gloria Loring
Alan Thicke and Gloria Loring were married from 1970 until 1986. Loring’s music career took off in the late 60s; she met Thicke during a concert in Toronto, and the two straight clicked, both personally and professionally: they co-wrote the theme songs for popular sitcoms Diff’rent Strokes and The Facts Of Life. They also had two sons together: the first is named Brennan; the second is pop star Robin Thicke, pictured above with his mother at the 2016 Grammys, and to whose music father Alan often has sex with his third wife (that’s true.)

On a related note, here are Gloria and Alan singing the song “Hollywood Nights” together during a Canadian telethon in 1983:

Gloria reflected on her time with Alan in a 2011 interview with Blast Zone. Gloria’s answer kept things cordial, and contained not a hint of bitterness: “Like any marriage,” she said, “it was challenging, exhilarating, memorable, and a deep learning experience.”

Wife #2: Gina Tolleson
Alan met second wife Gina Tolleson in 1992: she was a 22-year-old South Carolinian and former Miss World still working for the foundation; he was a dashing 45-year-old, star of the hit Growing Pains, and six years removed from his first wife. Did sparks fly? “He is the love of my life,” Tolleson said, not long after the pair met. And, while she sounded firm when she said, in 1993, “There are no wedding plans at this point,” the two tied the knot on August 13, 1994. Their son, Carter William, was born in 1999–shortly before the parents’ divorce was made final.

Unfortunately, photographs of Gina Tolleson and Alan Thicke together are nearly impossible to come by. However, footage of Gina’s beauty queen career exists–here she is being crowned Miss World in 1990:

Additionally, here’s her final walk as Miss World before crowning the 1991 pageant winner:

While Gina has shied away from the limelight in the years since her and Alan’s divorce, Alan opened up about the drama in at least one high-profile interview: the one he gave to People in September of 1999, just as the ink was drying on the divorce papers. “I think this is a disgrace,” he said. “We had no problems that, in my opinion, mature, committed adults shouldn’t be able to solve….a mountain of minutiae, those kinds of things—forgiveness, growth, communication—you need to master to get from the fairy tale to real life.”

Alan also expressed his greatest regret: That little Carter William would grow up in two different homes. “We have to dedicate ourselves to making his life perfect in every way,” Alan explained, “except for one—he won’t know his parents together. For that I will grieve the rest of my days.”

Wife #3: Tanya Callau
Alan Thicke’s third marriage came thanks to long-time girlfriend Tanya Callau. They met in 1999, but didn’t put rings on it until 2005: He was 58, she was 30, and it was a beautiful Cabo ceremony: 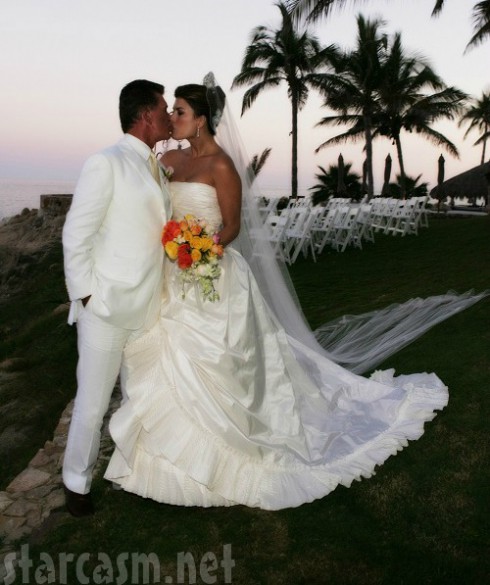 As we reported in our earlier profile of Tanya, she emigrated to the United States from her native Bolivia to chase her modeling dreams. After moving north in the 90s, Tanya began finding steady work–in fact, she met her future husband while on a modeling job in Miami. (Click here to read our full profile of Tanya Thicke.) And, in case you were wondering, the answer is yes: Alan’s son Brennan is actually slightly older than his stepmom Tanya.

Thanks to the wonders of social media, photos of the pair are not hard to come by. Here they are together in a sweet #TBT shot…

…and enjoying a relaxing afternoon at home…

Thank you @peterbregg for these wonderful pics!!! You have brought back SO many great memories!! ❤️❤️❤️ #hellomagazine

…and looking fine, as always, in another shot of throwback glory:

One more item of note: Alan Thicke and actress Kristy Swanson dated for a considerable time in the mid-80s, and were actually engaged to be married in 1988, when he was 41, and she was 19. Kristy confirmed as much during a Loveline appearance back in 2002: “We were 22 years apart,” she explained. “I was 17….[We met] on the Warner Brothers lot.” Though the exact reason why isn’t widely known, Thicke broke off the engagement and ended the two-year relationship shortly after proposing.

Alan Thicke’s Unusually Thicke airs on Pop and returns for its third season on Wednesday, September 21.

Insider on Catelynn Lowell and Tyler Baltierra’s wedding: ‘It was a giant love fest’

EXCLUSIVE INTERVIEW Who is Steven Assanti’s wife? Stephanie Assanti explains how they met, talks his ‘heart of gold’