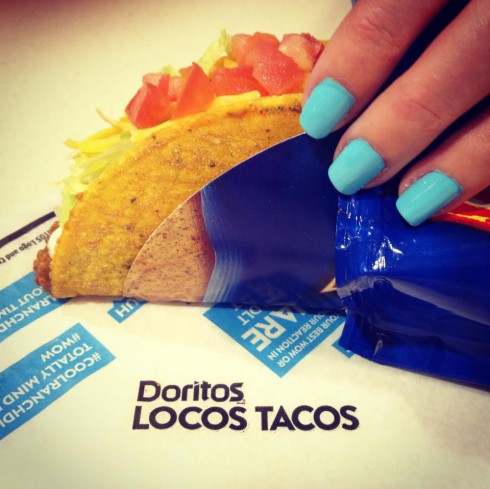 If there were an Academy Awards for fast food, Taco Bell would have swept last year’s ceremony with their perfect union of everyone’s favorite nacho cheese flavored corn chip and everyone’s favorite Mexican fast food — the Doritos Locos Taco. Now the restaurant chain has announced a sequel to their critically-acclaimed blockbuster culinary masterpiece — the Cool Ranch Doritos Locos Taco!

The announcement came just a few hours ago via Taco Bell’s Facebook page on which they posted the photo above along with the caption, “It’s out of the bag. Coming March 7th.” And they changed their profile photo to this enticing tryptic:

TacoBell.com changed its look as well, adding this promotional image with a link to their Facebook page:

The restaurant is currently encouraging everyone to share their excitement about the new Cool Ranch Doritos Locos Taco on Twitter along with the #CoolRanchDLT hash tag. And just in case you needed something more than photos to help you out, they created this little Vine video clip to help convert the nonbelievers:

I try to limit my fast food consumption, but I have to confess that 90% of the time I do make a fast food run it’s to get a few of them scrumptious DLCs! And I will also confess that I will probably make a “run for the border” on March 7 to grab a couple CRDLTs on the day they come out (much like I used to do with Bruce Springsteen albums back when people still bought CDs).

So what do you think Starcasm nation? Are you excited about the Cool Ranch Doritos Locos Taco?!?