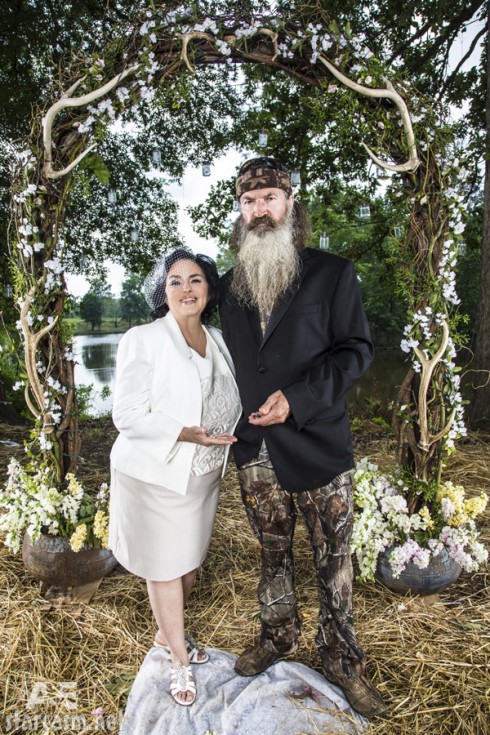 The Duck Dynasty Season 4 premiere airs Wednesday, August 14 and in the hour-long episode fans will be treated to a special event — Phil Robertson and Miss Kay are getting married! Well, getting married again. Well, renewing their vows. Hey, you know what I mean Jack!

Here’s the network’s description of how the event goes down:

In the special one-hour season premiere, the ladies enlist Uncle Si to distract Phil & Kay by taking them on a walk down memory lane while Willie, Jase and Jep set up a surprise vow renewal for their 49th anniversary. But true to form, Si recalls things differently. 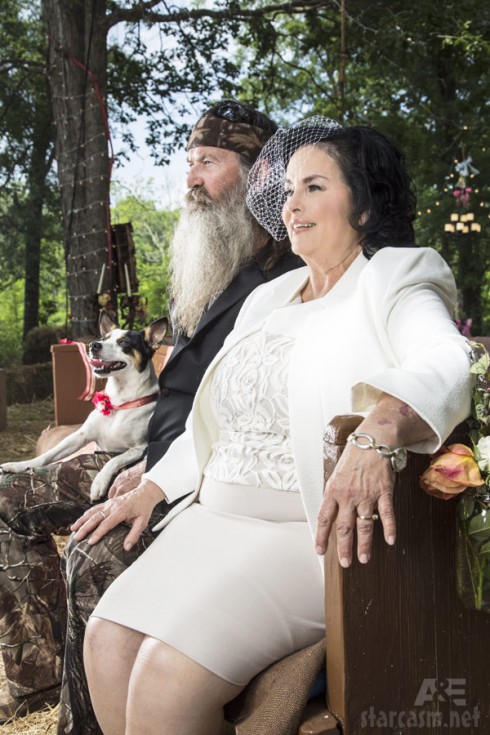 Check out Phil and Miss Kay! I don’t think three happys are enough to describe ’em 🙂 (Actually, Phil has his usual “Grumpy, Grumpy, Grumpy” face, but we all know there are about 49 happys just below the surface.) Here’s a photo from the actual vow renewal: 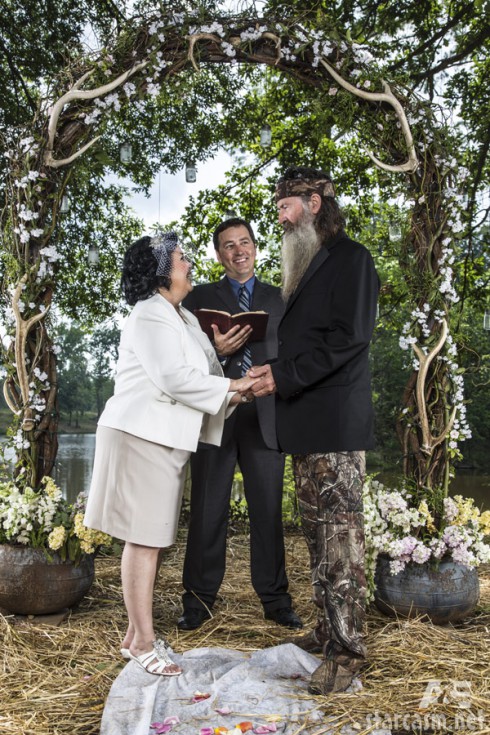 Now that’s what I call a Louisianniversary right there! How can I get one of those antler and vine floral arches?!? And I don’t know if you noticed, but that’s Phil and Miss Kay’s oldest son (and newest Duck Dynasty cast member) Alan Robertson conducting the ceremony. (There’s another, clearer photo of Alan below.)

Phil and Miss Kay (and Alan) weren’t the only ones to get gussied up for the shindig as the Robertson boys all combed their beards and donned duxedos to honor their mom and pop’s near half century of marriage. Here’s Willie Robertson demonstrating his mad yoga skills learned last season doing the forward facing bear hug: 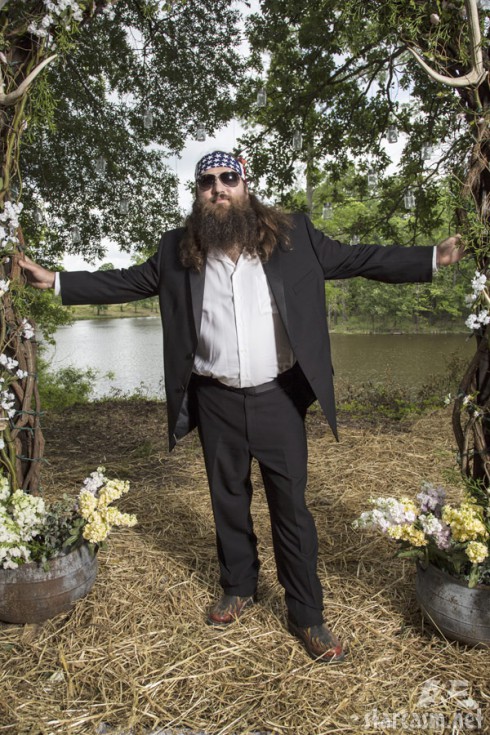 The Robertson boys cleaned up pretty good I guess, but as usual it was the Robertson ladies bringing the real refinement and sophistication (and gorgeousness) as Korie Robertson, Missy Robertson, and Jessica Robertson were stunning dressed in bright, warm-colored dresses of orange red and yellow for the big event: 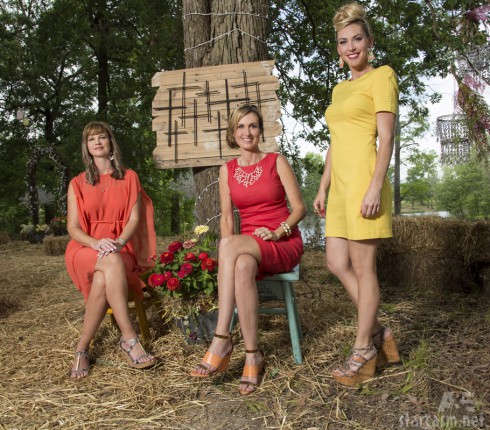 Here are photos of Jase Robertson and Jep Robertson with their spouses, including a great photo of Jep and Jessica Robertson (top) in front of the rustic and crafty Phil and Miss Kay vow renewal ceremony decor: 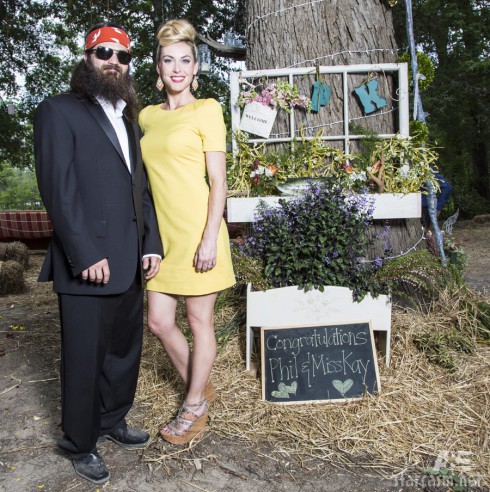 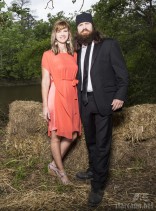 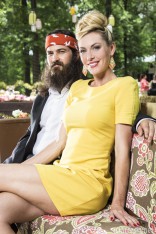 But enough with the youngins! Hey, this here post is about Phil and Miss Kay! And in case you didn’t know, these two were high school sweethearts and have been together ever since. Here’s a throwback photo of Phil Robertson and Miss Kay when they were dating in high school: 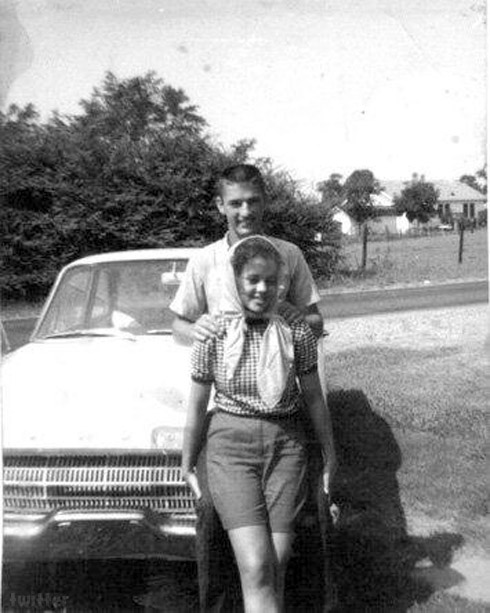 And here are some more photos of Phil and Miss Kay from the vow renewal ceremony: 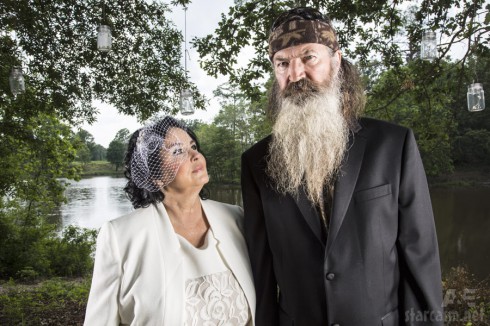 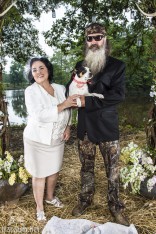 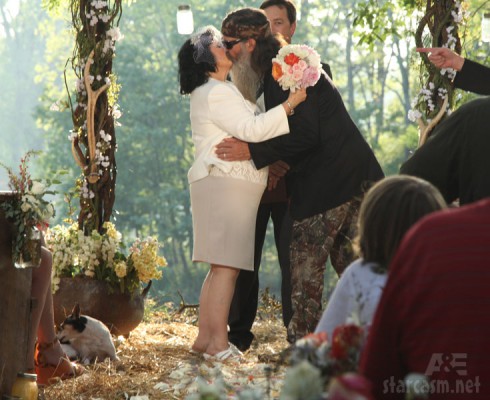 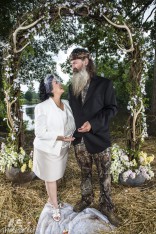 Congratulations to Phil and Miss Kay – I can’t wait to see the ceremony during the premiere. We should start taking bets now as to which bushy face will shed the first tear 🙂

And just in case you were wondering, yes Uncle Si was at PhilnKaypalooza too! You can see him (and his blue cup of sweet tea) at the ceremony in this zoomed-in shot, where he was standing beside his brother Phil in what I assume is the wedding vow renewal ceremony equivalent of the best man role: 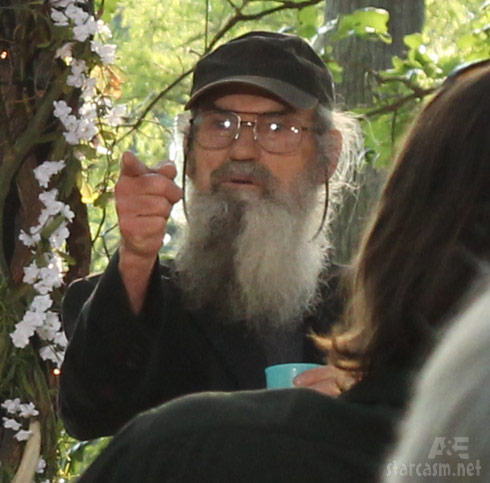 Duck Dynasty returns to A&E for its fourth season on Wednesday, August 14 at 10/9c. Hey, write it down Jack!