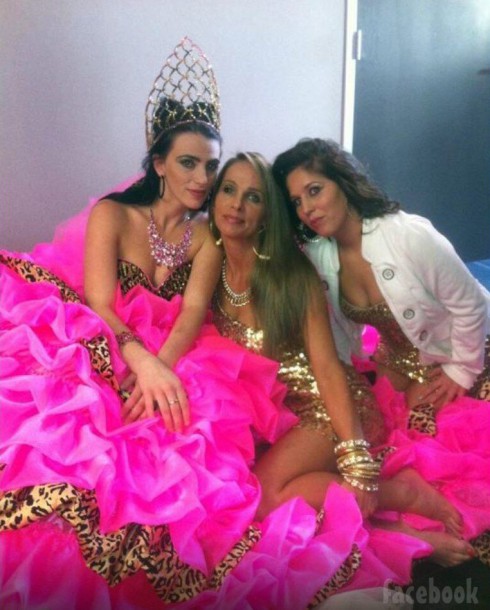 If you watched the season premiere of TLC’s Gypsy Sisters then you saw the bombshell revelation that Mellie’s getting married! That’s right, Mellie Stanley and her man Robbie are planning to walk down the aisle and we all know what that means… it’s another big fat American gypsy wedding y’all! And not just any big fat American gypsy wedding, this is “Hellie Mellie” Stanley we’re talking about!

Mellie is the self-described black sheep of the Stanley family, and she is clearly comfortable eschewing some of the traditional gypsy taboos (like stripping), but will she abandon their history of lavish blinged out matrimonial attire? Hell no!

Mellie’s wedding dress is the fashion equivalent of her colorful and sometimes animalistic personality with its bejeweled leopard print bodice, towering tiara, and miles and miles and miles of hot, hot, hot pink ruffles! About the only thing I can think to say is that she looks like a Mellieon bucks 🙂

I’m guessing that gypsy seamstress/designer extraordinaire Sondra Celli made the dress (purely speculation), but it is apparently Mellie who gets the credit for coming up with the design. “I designed that dress myself,” she wrote on Facebook. And her claim is backed up by photos she posted on Facebook back in October when she was obviously trying to figure out what she wanted her wedding dress to look like:

I would say the end result is the perfect marriage between all three of those designs, plus a few scoops of bling of course.

UPDATE – It was in fact Sondra Celli who made the dress! Check out this video clip from TLC in which Mellie sees the dress and tries it on for the first time!

Something I didn’t notice until I saw the video clip are the cutouts on either side of the bodice! Sondra sure knows her clients 🙂 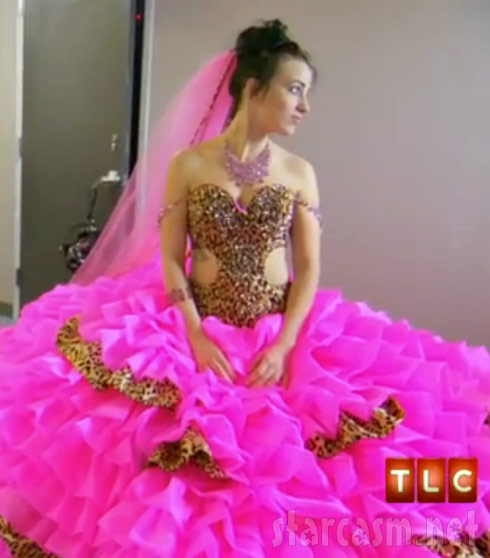 Although Mellie is clearly the belle of her wedding ball, her wedding party also brought the KAPOW! in some tight gold sequined mini dresses! 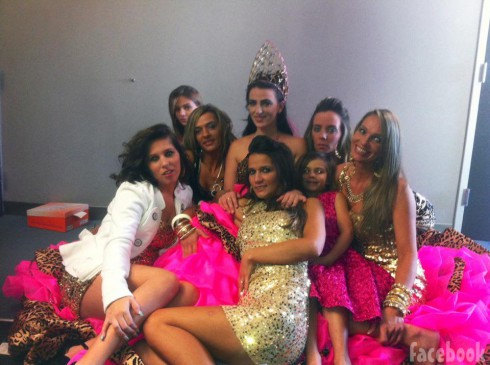 Say what you will about Nettie, Kayla, Laura and their in-your-face personalities, but I can’t imagine a hater out there saying they don’t know how to pack a dress!

For those wanting actual details about Mellie Stanley’s wedding, it took place at the Historic Jordan Springs Event and Cultural Centre in Jordan Springs, Virginia on November 4, 2012. (You might remember the facility from My Big Fat American Gypsy Wedding when Annie had her winter-themed wedding extravaganza there.) 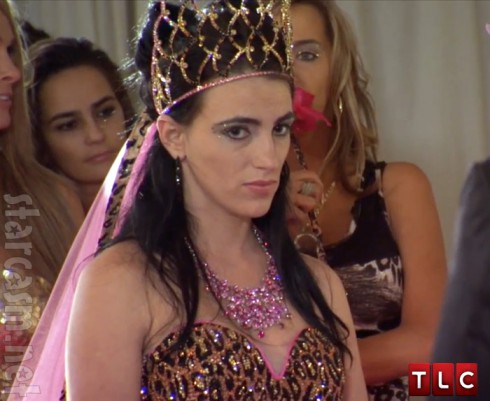 ***SPOILER ALERT*** Sadly, it doesn’t appear as though Mellie’s marriage to Robbie worked out. Although Mellie is pregnant with Robbie’s child, the two called it off just weeks after the ceremony. “F**K it yea that’s right I’m back single and at it again hmu…” Mellie wrote on Facebook on november 23. A commenter offered her support, to which Mellie responded, “Thanks … but I swear I’m good best thing that ever happened.”

“Robbie is a no good bum ass that’s why he is left in the blind he will never see his kid he needs to go do some more stupid ass sh!t and get locked up AGAIN,” Mellie added on a fan page.

Be sure to tune in to Gypsy Sisters on Sunday nights at 9/8c on TLC to see more drama leading up to Mellie’s wedding (and hopefully after)!