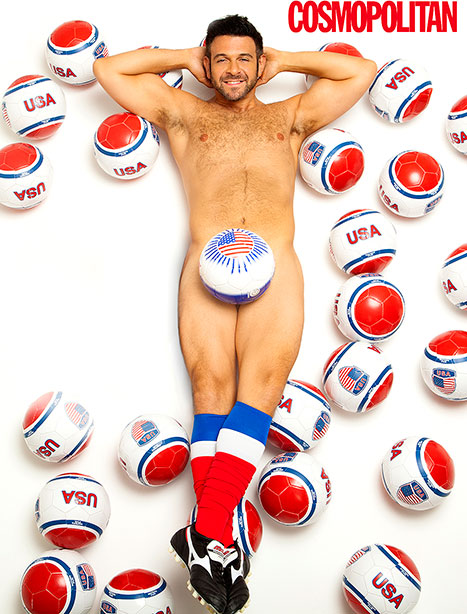 We write regularly often about female celebrities’ nude photoshoots. (I’m looking at you, Kendall Jenner, Scout Willis, etc.) But what about some manly eye candy?! Man v. Food‘s Adam Richman dared to ditch his clothes for a new Cosmopolitan U.K. spread… And it only seems fitting to use the word “YUM” to describe the results.

“To go from hating the way I looked to being a Cosmo centerfold is a profound honor. If you’re a guy who’s always been the fun-to-be-around teddy bear, then all of a sudden people are viewing you as sexy it’s nice,” said Adam, who lost an additional 10 pounds in the past few months for a total 70-pound weight loss. 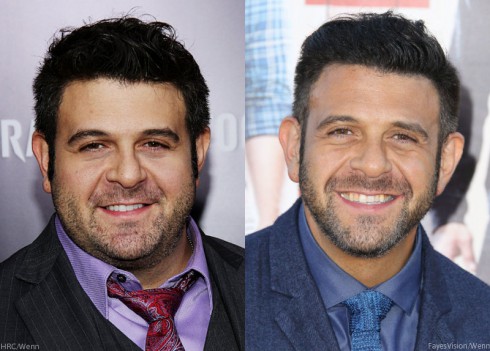 For Adam, long gone are the days of scarfing down super-sized pizzas or burgers. Instead, he said he primarily eats “clean foods,” such as raw nuts and Greek yogurt. He also picked up soccer for a fun way to log a great workout.

“My soccer training includes squats, pushups, resistance-band work, and sprints,” he wrote for Men’s Health last December. “Ninety minutes of running became part of my love of the game rather than a chore.”

In fact, Adam’s gotten so good at soccer that he was recruited to play in the UK’s Soccer Aid benefit for UNICEF this weekend.

“Taking part in Soccer Aid was a big motivation to stay fit. I actually cried when I was asked to take part,” he told Cosmo. “If I was still 200 pounds plus, people would have said, ‘Maybe you can be a mascot, but I don’t think you can play.’ Now, I do intense workouts involving plyometrics, intense running, ball skills drills — I barely have enough energy to get into the shower at the end of the day!”