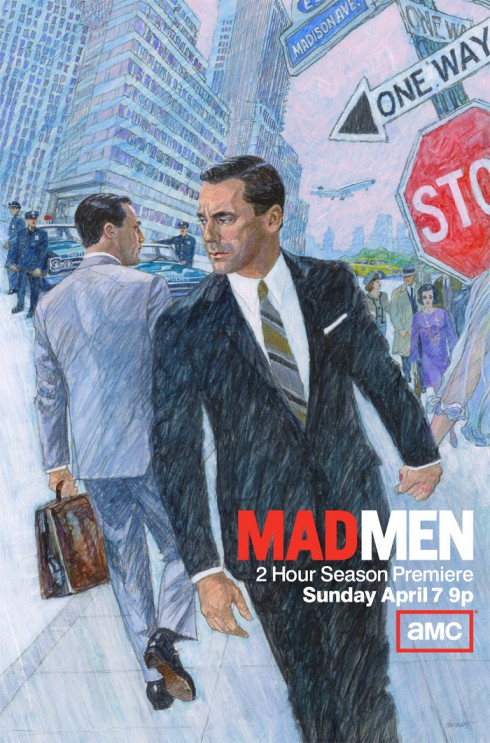 AMC released the official Mad Men Season 6 poster today (above), and as usual it’s got all us Draperphiles scouring over it looking for clues about what to expect in the upcoming season. The illustration features two Don Drapers walking in opposite directions on Madison Avenue, both of them seemingly just catching a glimpse of the other over his shoulder. The laws of perspective allow “One Way” and “Stop” signs to loom precariously over both figures as all kinds of brain-tinglingly significant (probably) stuff goes on in the background!

There are police cars, a jet plane, and a mysterious woman holding hands with the Don Draper walking towards the viewer. So what does it all mean? Obviously there is the consistent theme of two Don Drapers (or Don Draper and his reflection), which makes a lot of sense because Don was actually born Richard “Dick” Whitman before assuming his current identity when his comrade named Don Draper died alongside him in the Korean War.

I think the policemen and the airplane do have significance, and the combination of road signs seem to indicate that the Don Draper without a woman is heading for an inevitable disaster. I’m just having fun grabbing at straws though. (Business Insider ventured a guess as to seven different potential clues included in the poster, but one of those was the fact that there will be a two-hour premiere on April 7 — which could hardly be considered a “clue.”)

It might help all you aspiring graphic detectives to know that a lot of the elements in the design were also in the original illustration (by the same artist, Brian Sanders) that first appeared in a ten-part serial for the magazine Woman’s Mirror in 1964! 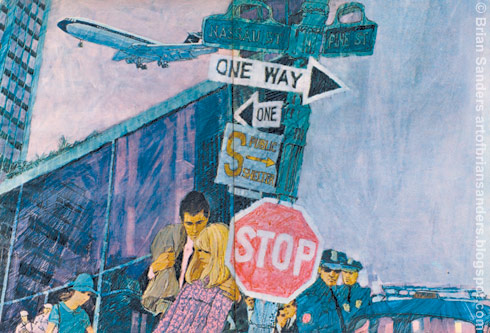 Bryn Havord was art director of Woman’s Mirror at the time and has since created a wonderful blog documenting five decades of work by Sanders over at artofbriansanders.blogspot.com. He explains that the above illustration was the first two-page spread in the serial.

So how did Brian Sanders wind up recreating and revamping his classic work for Mad Men?

According to The New York Times, show creator “Matthew Weiner, inspired by a childhood memory of lush, painterly illustrations on T.W.A. flight menus, decided to turn back the promotional clock. He pored over commercial illustration books from the 1960s and ’70s and sent images to the show’s marketing team, which couldn’t quite recreate the look he was after. ‘Finally,’ he said, ‘they just looked up the person who had done all these drawings that I really loved, and they said: ‘Hey, we’ve got the guy who did them. And he’s still working. His name is Brian Sanders.””

“What it did was take me right back, about 50 years,” said the now 75-year-old Sanders. “It’s a style we refer to over here in England as bubble and streak,” he said in his telephone interview from his home in Essex. “I don’t work in that manner now, and I was surprised how quickly it came back, the ability to use it in that particular way.”

“The show is telling the history of advertising, and part of that story is about photography completely eclipsing illustration,” Mr. Weiner said.

Mad Men returns for its sixth season Sunday, April 7 at 9/8c on AMC with a special two-hour premiere.

What’s the story behind the Coke ad from the Mad Men finale?