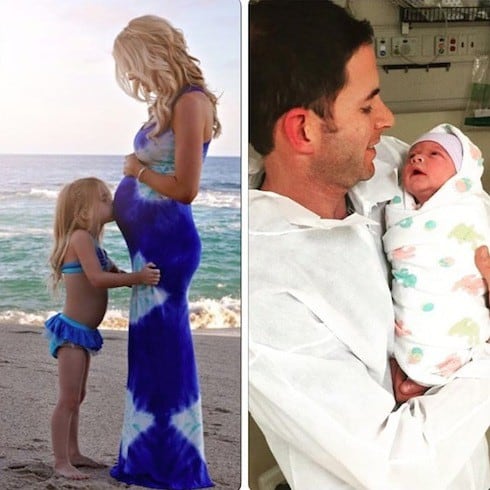 It’s a Flip Or Flop new baby bonanza, as Christina and Tarek El Moussa are celebrating the newest iteration of their hit HGTV show as well as their son’s very first birthday! The always-prolific picture posters have not been shy about revealing some sweet family moments during Brayden’s first year of life–and, starting with the newest Flip or Flop episodes (airing this summer), about sharing some of those moments on television, too!

Nor has the family been shy about revealing some of the harder moments they’ve experienced in the past year. Christina El Moussa won praise and admiration from fans and fellow mothers alike for an early 2016 interview in which she got “brutally honest” about her difficult pregnancy and the postpartum depression that followed.

“I felt like I got beat up by a world champion boxer,” Christina said, adding that “C-sections suck….My entire body hurt, literally my entire body…and it felt like my stomach was going to fall open when I stood up….For two weeks I felt like sh!t. Really, like sh!t. So I asked for help, which I don’t normally do.” Getting back into the swing of regular exercise helped, but it didn’t fix everything; Christina also shared that she “suffer[s] from a lot of mommy guilt,” in part because she “went back to work five weeks” after giving birth.

But, in addition to doing as much “girlie stuff” as possible with daughter Taylor, Christina said that bonding with Brayden has been a breeze–and a blessing. “Baby Brayden is such a good baby boy,” she shared, “which does help emotionally. I am SO lucky to have such a happy baby. He is such a joy to be around it’s incredible.” (Click here to read our full feature on Christina’s interview.)

Combine Christina’s emotional struggles with Tarek’s still fairly recent cancer diagnosis (he remains in remission), and you can begin to understand why little Brayden seems to be such a ray of light in their lives! So, without further ado, here’s a Flip Or Flop new baby photo gallery, featuring just-revealed shots of little Brayden!

Happy Birthday #BraydenJames we ? u

Happy 1st birthday #BraydenJames . You fill our lives with so much joy and happiness. I love how you are always smiling, you are the #SweetestBoyEver … Love you to the ? and back. ?

When your baby matches your decor ?. One more day until this cutie turns 1! ? #BraydenJames

The obsession is real #BraydenJames #HappyBoy ?

RELATED ARTICLES: Are the Flip Or Flop auctions real? Tarek and Christina explain how their HGTV hit works