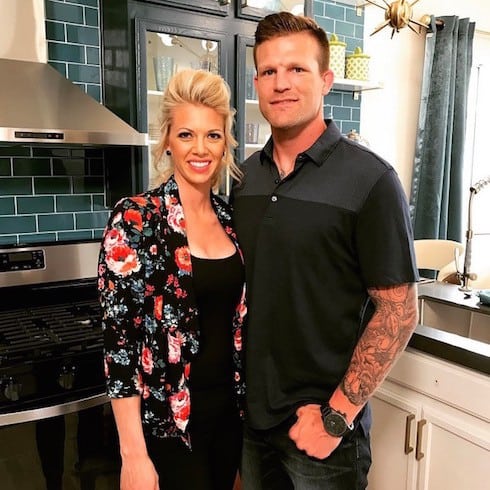 After months of going back and forth on the decision and appearing to change their mind as often as a politician running for office, it seems that HGTV has decided to cancel the original Flip or Flop. That’s the latest in a new report from In Touch, which takes the unusual step of mentioning that “five sources” close to the show–and not just the usual single anonymous one–have confirmed the HGTV Flip or Flop canceled rumors.

According to the article, the network “won’t go beyond what they’ve already shot,” meaning that recently wrapped Season 7 will be the last for Tarek and Christina El Moussa, whose divorce is expected to be finalized later this year. The primary source, said to be a “high-level network” exec, confirms that HGTV will instead move forward with its five Flip or Flop spinoffs. Flip or Flop Vegas, the first of these, features former MMA star Bristol Marunde–pictured at the top of the article with his wife Aubrey–premieres on April 6th at 9 PM: right in the original Flip or Flop‘s time slot.

Last December, after news of Tarek and Christina’s split became public (and the rumors about their relationship were at their ugliest), the story was that the two refused to be around each other and wouldn’t resume work on the show. However, when HGTV threatened them with a breach of contract lawsuit, they allegedly decided to put on as brave a public face as possible and grit their way through the most awkward Season 7 since Amy Sherman-Palladino got fired from her own show.

But fans of the original might not have seen the last of (at least) half of the El Moussas. Christina, according to a different source, is “shopping an interior design show around” and is “drawing a lot of interest” from other networks. (Though that same source adds that Christina “feels HGTV will let her out of her contract,” suggesting that she might be beholden to the network beyond whatever agreement she and Tarek have.)

While that particular drama plays out, here’s the real-life story of how Bristol “Batman” Marunde once chased down and subdued his neighbor’s rapist thanks to his fighting prowess. No word on whether he’ll be taking down drywall with his bare hands on Flip or Flop Vegas.

Tony Romo breaks up with Jessica Simpson on the eve of her 29th birthday!