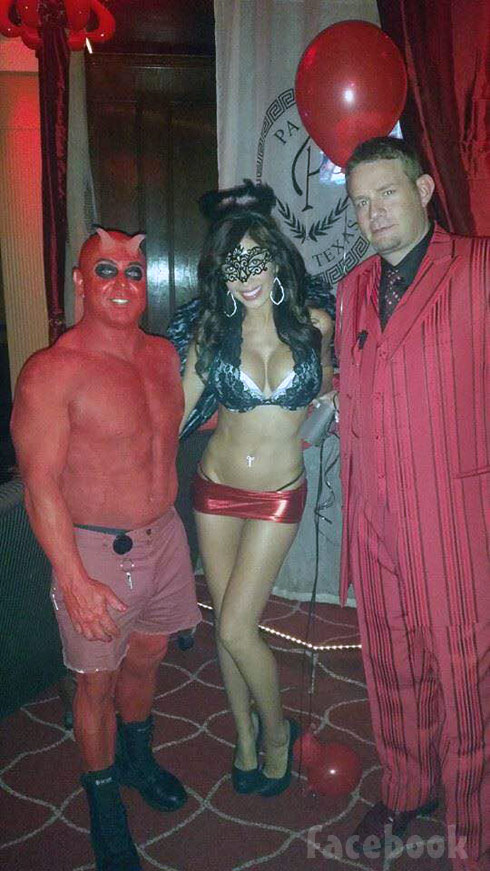 Above you can see Farrah (in a rare photo of her taken inside Palazio) posing with a couple of decked-out Beelzebubbas. Farrah is sporting some racy face lace, a black feather halo, and a devilish red ultra-mini skirt that looks to measure about four inches tall — just enough to cover her Farrah Abrahoo-hoo.

Here’s another photo of Farrah posing with a female fan whom I’m guessing didn’t take home the $500 prize for best costume: 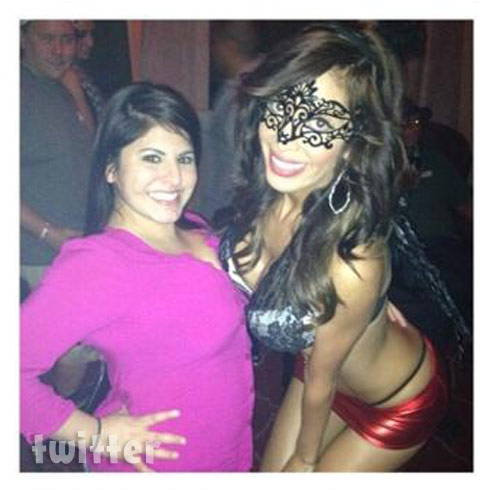 Farrah’s gig at Palazio has lasted months now, and it appears as though she is really taking her job seriously. She recently posted some photos of herself honing her erotichnique at the Brass Ovaries pole dancing school:

In other Farrahntrepreneur news, she has finished up work on her first feature-length film (no, that one doesn’t count) as Fanny Rae Baker in the slasher sequel Axeman 2: Overkill, and tonight she will be in San Diego to promote her line of Topco sex toys at the Hustler Hollywood store followed by an appearance Saturday night at the West Hollywood location.

“We are extremely excited to have Farrah at the Hustler Hollywood stores this month to promote her adult novelty line,” says Lynda Mort, Topco Sales Director of Sales and Marketing. “We have seen an incredible response to her line, and we are excited for these upcoming appearances.”

“Farrah’s line is a big hit with our customers and we are thrilled to have her at our stores in Southern California,” said Sr. Director of Retail Operations, Philip Del Rio. “She has fans from all walks of life, from her Teen Mom days and now her presence in adult entertainment. These will definitely be two great events.”

So if you’re in Sand Diego this weekend, go meet Farrah and buy a piece of her to take home and do things to! (Anybody can sign a book or a CD for you, but how many will sign her hoo-hoo for you AND let you keep it?)