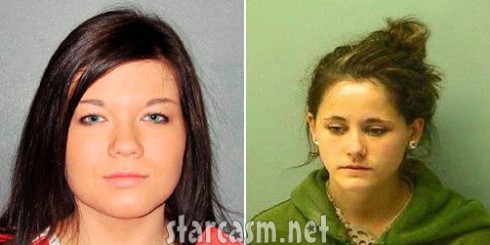 As previously reported Amber Portwood became a Teen Mom turncoat, running her mouth about Jenelle Evans creating a sad rift in the TM universe.  Portwood, who is by no means the example of modesty or one to turn away from a paparazzi’s camera, told E that:

“I pretty much despise what she stands for. She’s an idiot and I don’t care if people know or not,” Amber told us. “I literally have worked my a$$ off because of this whole battery thing to make sure I keep my daughter. They [MTV] shouldn’t put her on, it’s embarrassing!”

Well Jenelle has responded as we all thought she might and her answer was short and kinda sweet.  Here is Jenelle’s Twitter jab following Amber’s diss:

Calm, cool, and collected.  Hey, wait a minute!?! Does our girl Jenelle have someone droppin’ her Twitter bombs for her now.  That’s WAY relaxed for Miss Evans.  I guess our TM 2 girl is showing some of that maturity flavor and in turn appears to have come out the bigger woman so to speak.  Remember you can cast your vote for A. or J. at our poll here.

UPDATE: Thanks to a few of our hard core Teen Mom readers I’ve been informed that the Jenelle I thought I knew did fire back a candid tweet but later deleted it before I checked her page.  According to these tips Jenelle tweeted something along the lines of:

“Amber Portwood I despise the way your tattoo looks, the pills you pop, and the men you abuse.”

These readers also state that Jenelle dissed Amber in regards to her leaked nude photos as well.  Thanks for the heads up ya’ll!