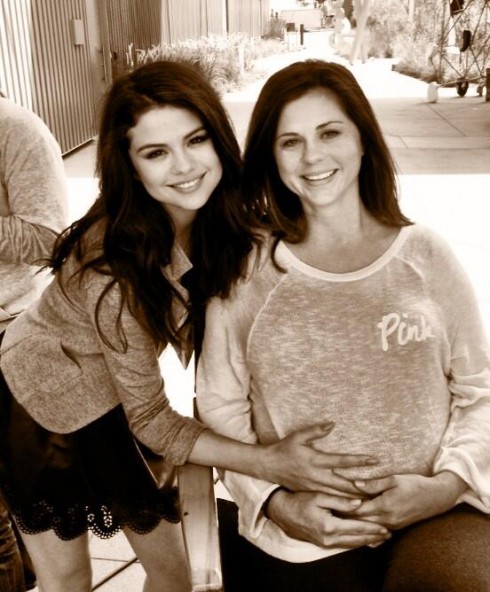 Is Selena Gomez going to be a big sister?

That’s the question fans are asking after the singer posted the above Twitpic in what certainly appears to be a baby bump clutching pose. “Hope all the amazing moms had a great day?” the newly single Selena tweeted to her 15 million followers on Mother’s Day morning. “I have the best momma in the world :)) I love you so much!”

Selena didn’t say a thing about her mother’s pregnancy — or even hint that she was expecting — but judging by the photo, her mother Mandy Teefey appears to be sporting a baby bump.

This would be the second child for Mandy who married Brian Teefey in 2006. Mandy had previously been married to Selena’s father, but they divorced when Selena was just 5-years-old.

In a recent interview with Glamour Magazine, Selena discussed growing up without her father around. “I definitely didn’t appreciate [my upbringing] when I was little. I was frustrated that my parents weren’t together and never saw the light at the end of the tunnel where my mom was working hard to provide a better life for me,” Selena admitted, adding, “It’s because of [my mom] that I can do things on my own.”

Back in December of 2011, Gomez cancelled concert dates in the wake of her mom sadly suffering a miscarriage, according to E! News.