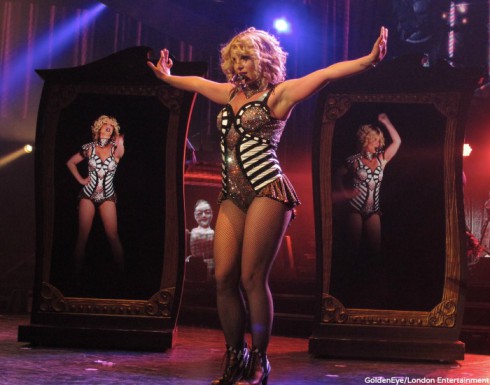 Britney Spears opened her two-year residency at Las Vegas’ Planet Hollywood last night. Even though there were literal smoke and mirrors, the general consensus is that Britney killed the show.

Unlike some of Britney’s recent tours, the Piece of Me show was all about her greatest hits — including 1999’s “Oops! I Did It Again.” With numerous costume changes and elaborately choreographed routines, the show was also incredibly visual. Although most agree Britney did some lip-syncing, few could deny it was an entertaining show.

Britney also earned rave reviews from celebrity friends in attendance. That crowd included Katy Perry, Selena Gomez, Miley Cyrus, Adam Lambert and sister Jamie Lynn Spears. Mario Lopez even made a cameo appearance in the show — crawling on the ground as Britney held him back with a leash.

Check out photos from Britney’s opening night at Planet Hollywood…

The positive reviews for the show is great news for Britney’s team, which was undeniably disheartened by poor “Britney Jean” sales. There is also good news for any fans interested in seeing the show: There are 99 more performances planned throughout the next two years with possibility of more dates if tickets sell well.

PHOTO Britney Spears as a mermaid with sons Preston and Jayden