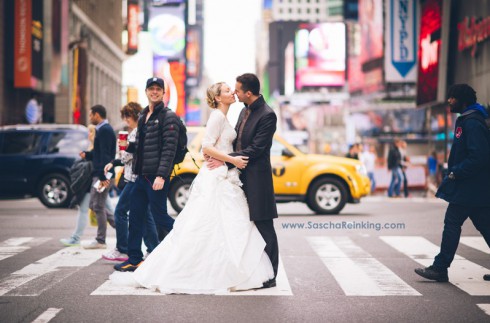 This is a photobomb for the history books: Actor Zach Braff was just strolling along in New York City when he stumbled upon an ongoing wedding photoshoot. Just as when he photobombed Fergie and Jessica Alba last month, the Scrubs actor quickly put on his goofiest smile and became the unintentional focus of the photo.

Initially, Zach was the only one who knew what happened. It wasn’t until Sascha Reinking began going through the pictures later that he realized the gem captured on film.

“I scanned through the set and his face looked familiar. ‘Is that Zach Braff?’ To find out I posted the photo on some of my Photographer Facebook Groups and the verdict was pretty clear. It definitely looked like Zach Braff had photobombed our session,” the photographer said on his website.

With his friends’ support, Sascha tweeted the picture to Zach to confirm he was the photobomber: “Sir, I think you photobombed my newlywed couple the other day in New York. 🙂 Well played…”

Zach responded it was one of his best photobombs. The photo has since been retweeted 10,000 times.

One Direction gets reverse photobombed at Machu Picchu