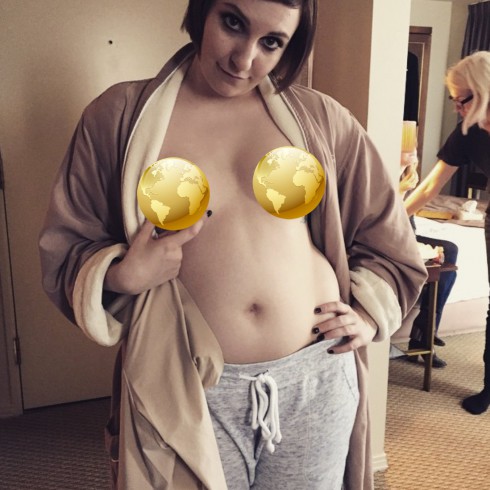 Lena Dunham, of Girls fame, dropped an interesting Memorial Day Instagram photo for all of us to consider. It’s a shot of Dunham, in the bathroom, wearing lingerie. It’s nothing untoward. But it has folks all up in a tizzy. First of all, here’s the picture:

The comment about being “lucky to be free” has drawn some criticism, mainly because, as one user put it, “it sounds like you are being sarcastic about Memorial Day, which is no laughing matter.” And, indeed, it’s difficult to tell if Dunham is being sarcastic or not.

The broader point, though, is that many of the critical comments focus on Dunham’s body–they tend to contain rather unflattering things regarding the Girls matriarch. It’s a strange thing to see brought up so frequently (and vigorously), though, considering how often Dunham appears in public wearing little clothing. And, honestly: is her photo so different from the oodles of other celebrities who pose wearing almost nothing? Like this,

What do you, the viewers at home, think?