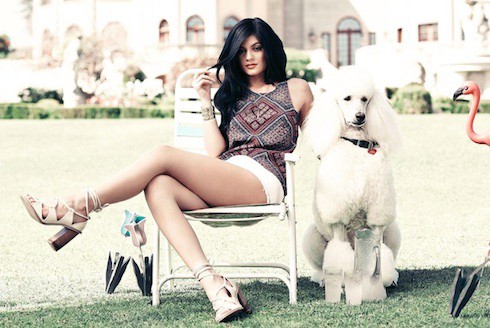 Over the past few months, Kylie Jenner has been linked fairly inextricably with rapper boyfriend Tyga. The pair are reportedly negotiating the terms of their Keeping Up With The Kardashians reality show spinoff, titled The Kylie Khronicles. They plan to elope in August, right around the time of Kylie’s eighteenth birthday. And Tyga, to the shock and disgust of many, said just a few weeks ago that he couldn’t wait for Kylie to turn eighteen “so [he could] put a baby in her.”

Given all that, the lyrics of Tyga’s new single maybe shouldn’t be so surprising. But, because Tyga is still 25 and Kylie Jenner is still seventeen, they really are. The song is called “Pleazer”–which, in case you were wondering, we know from the chorus is a reference to a woman who’s a “d*ck pleazer.”

But that could be anyone, right? Well–anyone with “that Kardashian p*ssy.” So, just a few anyones. And, more specifically, Tyga describes criminal activity with a simile for the ages: “About to catch a felony for it. Vagina juice like orange juice in the morning.”

So. Tyga never comes straight out and says the name “Kylie Jenner.” But it’s difficult to draw any but the most blunt conclusion, given that this is a song with only the bluntest possible lyrics. The song is “gross,” according to Perez Hilton. It’s “absolutely ridiculous,” in the words of Hollywood Life. And Radio.com, citing the line “shut the f*ck up and suck my d*ck,” calls “Pleazer” “one of the nastiest tracks of the year,” adding, “Yikes.”

Of course, it’s still possible that everyone who’s heard the track and inferred that Tyga is talking about Kylie Jenner is wrong. Couldn’t that be so? What do you, the listeners at home, think? Here’s the track in full: