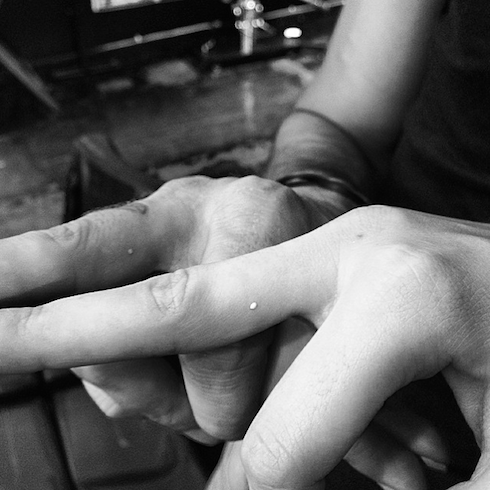 Kendall Jenner once echoed Kim Kardashian’s famous words about why she’ll never get a tattoo: “Why would I put a bumper sticker on a Bentley?” Which means she’s either decided that microscopic bumper stickers are OK, or she doesn’t consider herself Bentley-level material anymore, because Kendall now has a tattoo. Specifically, a teensy little pinprick tattoo on her middle finger.

You can see it there, in the photo above. No–it’s not wite-out. It’s a finger tattoo! In white ink. Of a dot. It looks a lot like wite-out. Kendall went to the New York City tattoo parlor of noted artist Jon Boy, who’s done designs for NBA superstar Kevin Durant, among others.

Fellow model Hailey Baldwin got a small lowercase “g” behind her left ear, as part of the “G for Georgia” campaign to raise awareness for a young girl with a rare brain condition.

Kendall Jenner wasn’t alone in getting a tiny white fleck of a tattoo, though. Photographer Joe Termini and singer Harry Hudson got the same design. (Might be a bit of a stretch to call this a design, but “mistake” is perhaps too harsh a word for such a little thing.) It’s either Termini or Hudson’s hand in the photo with Kendall’s above.

The immediate significance of the tiny white dot tattoo is not clear.