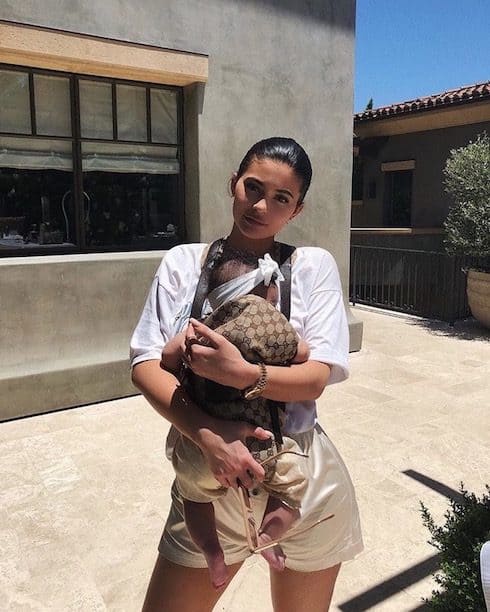 According to several new reports, Kylie Jenner’s growing concern over her social media presence led her to remove all public photos of her baby — and her bodyguards have apparently been receiving credible “kidnap threats” regarding baby Stormi.

Kylie, who’s perfected the science of social media monetizing over the last few years, is said to be terrified by the negative responses to her photos with Stormi Webster, which range from basic internet trolling to threats and implications far more dangerous. (Though it’s also worth mentioning that the overwhelming number of comments in the now-deleted photos appeared to be positive.)

Did Kylie Jenner really get kidnap threats about baby Stormi?

UK tabloid The Sun was the first to report on the threats, shortly after Kylie “cut [Stormi] out” of her social media feeds earlier this week. According to the publication, Kylie “made the decision to delete all the photographs…after kidnap threats to the Kardashian family.”

An insider told the publication that the “vile abuse, including terrifying threats,” have been “really upsetting for Kylie, because also some of the comments are direct threats to kidnap [Stormi].”

Compounding the emotional situation is the fact that Kylie seemingly feels conflicted about “putting her [daughter] in the limelight” — which “some of the crueler trolls have been blaming” Kylie for.

Said the insider, “Some people have commented saying it’s all Kylie’s fault because she has exposed her by putting her on social media. The haters have always been there, but just getting way, way worse…Kylie is terrified – she’s stepping up security. She hardly takes Stormi out in public but is now making sure that she’s got protection at all times.”

Kylie has talked about walking away from her growing empire before

It’s been a crazy few weeks for Kylie, who recently found herself at the center of a torrent of rumors claiming she’d actually fathered baby Stormi with her former bodyguard Tim Chung. There’s also been persistent gossip about Kylie’s apparent readiness to get pregnant again, since she’s said to be loving motherhood more than she ever thought she would.

Indeed, devotées of the Kardashian family were quick to point out some eyebrow-raising comments Kylie made about celebrity a few years ago. During a sit-down with Interview magazine, the then-18-year-old said she could easily envision a future where she lived as anonymously as possible. By 30, explained Kylie, she wanted “to go off the map, have a family, and live in Malibu with a farm, and just raise my own chickens.”

i spy with my little eye…

For Kylie, social media fame is becoming a double-edged sword

It’s easy to mock Kylie for her social media ubiquity and relentless product placement — her whole life appears to be brand development, has been for years — and people, us included, will continue to do so. That said, no one deserves abuse or threats on the level of these allegations, which further underscore the difficulty of being as visible as Kylie both is and needs to be.

Kylie’s family has built their persona and their fortune on the easy access of reality TV and social media feeds. It’s certainly not hypocritical for Kylie to want to pull back from her followers if she’s getting threats; however, since she’s now a mother and making decisions for two people, she has to figure out where the new boundaries lie. (Beyonce is probably a good role model in this area.)

A different insider inadvertently highlighted the divide with some recent comments for People. “Unfortunately, social media is a crazy place,” said the source, who added Kylie “doesn’t want her daughter’s pictures to be a part of something negative” and “won’t post any more photos of Stormi’s face” for the time being.

PHOTO Woman booted from flight over ‘obscene’ halter top: ‘I have to leave my titties at home?’