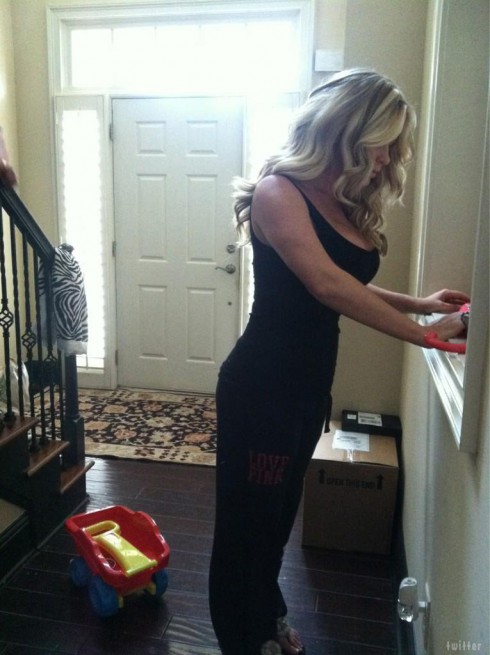 Wow! The Real Housewives of Atlanta‘s Kim Zolciak gave birth to son Kash Kade Biermann on August 15 and her daughter Brielle shared the above photo on Saturday along with the tweet, “seriously… who looks like this after 2 weeks of having a baby?”

Perhaps Kim is going back to using LA Slim Wrap, the technique that helped her lose the baby weight after Kroy Jagger was born. Here’s what she had to say about the controversial technique (which was featured on The RHOA) in July of 2011:

“I have been working hard to lose my baby weight and LA SlimWrap helped give me that extra push to get back to my ideal body! I felt rejuvenated, had more energy and could see and feel the difference! I lost inches and was able to get into my favorite jeans and they were even a little loose! I am a believer of LA SlimWrap and plan to incorporate their wraps into my regular beauty routine.”

You can’t argue with results! Congrats to Kim on not only getting her pre-pregnancy body back almost instantly, but also on her amazing turnaround from Big Poppa mistress to smitten wife and mother of two new sons! She really does seem to have found a happy ending – much to NeNe’s chagrin, I’m sure.

UPDATE – It should be noted that it is unrealistic (and often unhealthy) to expect to lose the weight gained during nine months of pregnancy in just two weeks. I originally wrote that Jessica Simpson should take notes, and that was nothing short of rude and insensitive. The comment has since been removed.