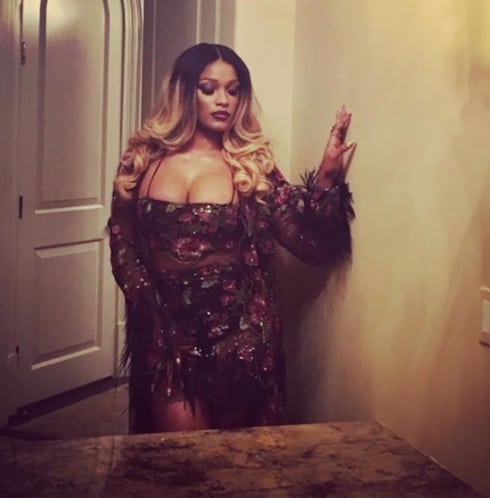 Is Joseline Hernandez pregnant? The latest twist in the epic saga that is Love & Hip Hop Atlanta Season 5 apparently involves the unexpected pregnancy of “The Real Baddest Puta,” and comes months after her phony marriage to Stevie J fell apart. In fact, Joseline and Stevie J have gone out of their way to insult each other over the past few weeks, and Joseline has been seen out and about with several high-profile men, among them Stevie J’s rival Rick Ross.

Joseline herself got the whole pregnancy rumor mill started when she shared the following update to her Instagram page after the most recent LHHATL episode:

A photo posted by Management:JoselineHernandez (@vh1joselinehernandez) on Jul 4, 2016 at 5:38pm PDT

VH1 appeared to confirm the Joseline Hernandez pregnant rumors with their own take, titling their article as matter-of-factly as possible: “Joseline Hernandez Posted a Picture of her Pregnant Belly.” And, as the network noted, the tattoos on the woman in the photo above are definitely Joseline’s.

When asked about children earlier this year, Joseline’s response definitely suggested that they were in her future: ““I do love kids. I do want kids and I am going to have some,” she said, “but I feel like a kid myself too so I’m not ready for kids because I feel so young.”

In the meantime, Stevie J and Mimi Faust have both responded to the rumors of Joseline’s pregnancy. Stevie did so with something of a cryptic (and since-deleted) tweet. “Time reveals all things,” Stevie told a fan who asked whether he had “knocked up” Joseline. Judging by the general reaction, many fans took that tweet to mean we’ll get the full story at the reunion special, tentatively scheduled to air in mid-August.

Mimi’s response was much more direct: “Who cares…#notme,” she said, in response to a fan on Instagram.

Of course, it’s also possible that this whole thing is just a publicity stunt (which actually seems a bit ridiculous, given how everyone watching LHHATL this season is doing so with eyes at a cartoonish width). Joseline uploaded another photo of her very flat stomach just two weeks ago:

A photo posted by Management:JoselineHernandez (@vh1joselinehernandez) on Jun 21, 2016 at 9:21am PDT

It is worth pointing out, however, that the upload doesn’t mean the photo was also taken two weeks ago.

RELATED ARTICLES: LHHATL Tommie confirms hookup with Joseline: ‘What that mouth do’

PHOTO Summer Bunni spills A1 and Lyrica’s tea again in deleted receipts: They’re ‘too scared to face the truth’