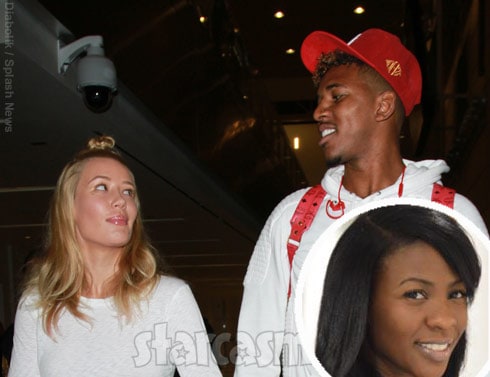 Keonna Green, the mother of Nick Young’s 4-year-old son, has finally opened up about getting pregnant once again with the professional basketball player — this time while he was engaged to rap star Iggy Azalea.

Azalea and Young split recently with Iggy later explaining that she called things off before she ever even heard about Green being pregnant. Azalea said it was video of him bringing women into their home that caused her to end things and that she learned about the pregnancy via E! News.

Azalea tweeted at the time, “I find it baffling anyone would make the choice to bring a child into the world under these circumstances + want attention and $ for it.”

Here’s some highlights of Green’s interview with US:

On finding out about Nick and Iggy being an item:

I found out through TMZ [in 2013] that they were dating. I inquired and there was denial. We had a rough patch from there. A couple of months into them being an item, she was moving into the house, so I called her. When I was dropping my son off, we met in the living room. I didn’t want my son around somebody I’m uncomfortable with.

On how the reconnection with Young happened:

It was last year, around September (3 months after Young and Azalea got engaged). We would take our son to Magic Mountain together. But sometimes Nick would say, “Oh, there’s too much traffic,” and he’d just play with Nicholas in his room. We got caught up in the moment and it just happened. I would be like, “Nick, you cannot be sloppy. You need to be honest [with Azalea].” He would say, “I don’t want to hear it.” I don’t know what was going on in his household, but me and Nick have lots of history. It wasn’t a secret on my end. I didn’t feel guilty because I was in love with a man, and I’m pretty sure I’m not the only woman.

On telling Young she was pregnant with his baby again:

It was 200 percent Nick’s child. He’s always supportive, but he was in shock. With him being in a public relationship, he didn’t know how to handle it. We didn’t get into [how he would tell Azalea]. I felt it was his decision how to handle it.

On what she would say to Iggy if they were to talk:

I wish her a lifetime of success. … I mean, I’m definitely not going to apologize for being in love with a man who I have a lot of history with. I do wish her that kind of success and hope that she can get through this difficult time and she and Nick can move forward from this.

Iggy’s attorney fired off a strongly worded letter to Green, warning that she better not disparage Azalea at all in what they called a pathetic money grab.

The letter, obtained by TMZ, reads in part:

“Ms. Green has done enough to embarrass herself by her pathetic efforts to profit from Iggy’s hard-won celebrity, all in exchange for whatever paltry sums she can garner in exchange for peddling tales of her tasteless exploits… Any mention of Iggy in your client’s efforts to sell a story to whatever tabloid needs to fill its pages with the fetid story of your client’s classless antics will be considered a violation of Iggy’s rights of publicity … subjecting Ms. Green and any publication that airs your client’s soiled laundry to significant liability.”

PHOTOS Did Iggy Azalea have plastic surgery on her chin?