As you might have guessed, there has been a bit of fallout after it was announced that former “Teen Bride” Courtney Stodden, now 21, is currently pregnant with her and 55-year-old husband Doug Hutchison’s first child together. As you might also have guessed, the biggest drama comes courtesy of Courtney’s mother, Krista Keller, who appeared alongside Courtney on Lifetime’s therapeutic reality series The Mother/Daughter Experiment.

“If it wasn’t for media I would not get to know the news about my daughter’s pregnancy,” Krista revealed to Fox News, adding that she isn’t sure “if this is accurate.”

Krista goes on to kinda not really say she’s happy for the mom to be: “If she is happy, I am happy for her. It would be nice to experience this with her, but as it still stands, she and I are still not speaking. I did not even hear from her on Mother’s Day.” Krista stirs up their family issues by then praising her other two daughters: “I was blessed to be able to celebrate it with my other two daughters, Ashley, 32, and Brittany, 30.”

Krista revealing that she and Courtney are not on speaking terms comes after Courtney told Wonderwall that their relationship is no better — if not worse — than it was before appearing on The Mother/Daughter Experiment.

“We’re completely on the outs right now,” Courtney said. “I hate to say that we’re in a worse place now than we were before we started, but we’re just not in a good place right now… Unfortunately, not much has been healed.”

After Krista’s comments about her daughter’s pregnancy, Courtney also spoke with Fox News. “My mother continues to play her ‘victim’ games to manipulate the media and ride on the coat tails of my celebrity in a pathetic attempt to remain in the limelight. Now she’s using my pregnancy in the same manner.” 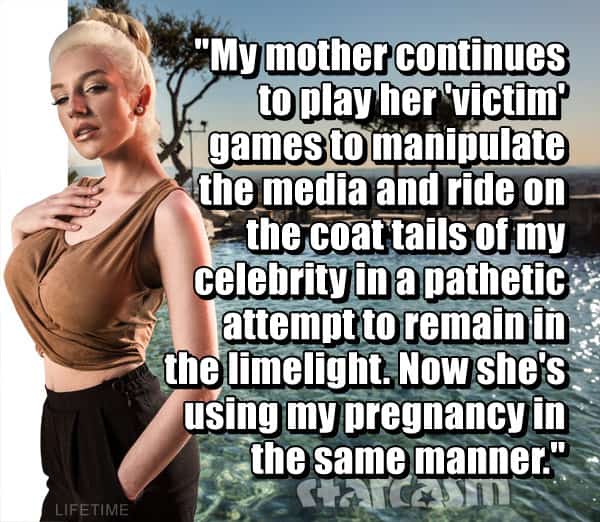 Courtney then explains why Krista didn’t hear from her on Mother’s Day: “The reason I didn’t reach out to my mother on Mother’s Day is because she is not being a good mother to me,” Courtney said. “The truth is, that my mother recently went to press to claim that I apparently have ‘the devil’s hands all over me’ and that a ‘Christian counselor’ informed her to stay away from me for at least 6 to 8 years.”

Meanwhile, Courtney posted a video on Instagram showing the moment she and husband Doug Hutchison revealed to his mother that she was pregnant:

That moment when we shared the news with Doug's Mama ? #4weeks #baby

Doug’s mother’s reaction was essentially exactly the same as most comments sections on posts about Courtney’s pregnancy. “No!” she says. “No! Nooo!”

Doug’s mom responds with, “Shocked! How did that happen? I know how that happened, but why?!”

The source goes on to make a rather bold claim. “If things go well in the next few months, Courtney could be the new Kim K, with people desperate to see how she and Doug do when the baby is born.”

I don’t know about Courtney becoming the next Kim Kardashian, but I will confess that I would certainly be tuned in for that show! At least for the first few episodes…

Rob Kardashian and Blac Chyna pregnant with their first child together