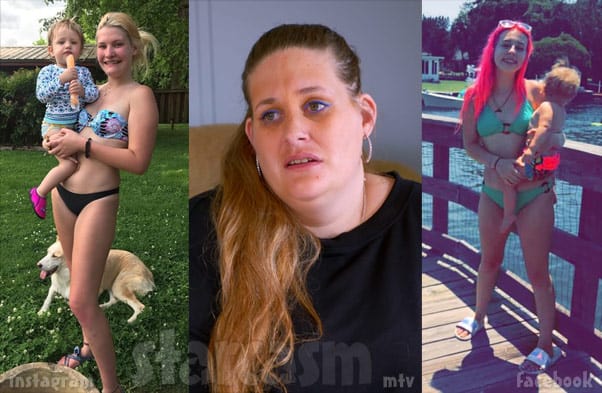 Teen Mom: Young and Pregnant star Rachel Beaver, her sister Malorie, and their mother Stephanie have continued their very public family feud. Two weeks after the three ladies went after each other in a series of bitter social media exchanges that revealed the Tennessee Department of Children Services is involved with Rachel and Malorie’s daughters, they are back to fighting once again.

It seemed like tensions were lessened when Rachel took her daughter Hazelee for a beach vacation in Florida recently, but that only resulted in a brief ceasefire. Earlier this week, Malorie apparently shared a post on Snapchat that included her mother Stephanie’s phone number. (Unfortunately, most all of the early posts made by Malorie on Snapchat have not been archived.)

Here is a partial recap of the drama, thanks in large part to the diligence of @teenmom.tea on Instagram. [All posts were originally shared by Rachel and Malorie on Snapchat.]

STEPHANIE [In a text message to Rachel]: Rachel that person just messaged me back and said that Mallory put my phone number all over Snapchat.

RACHEL [On Snapchat, along with a screen cap of the text exchange with her mother above]: & Malorie’s number is ***-***-**** 😊 Go blow her up you guys ❤️❤️ Tryna get people to harass our mom wtf is wrong with you. You need serious help but if you wanna go there, more ppl have sh*t they’d like to say to you than our mom 😊👏

MALORIE: [Posts a video of Rachel in which she must have appeared drunk or high?]

RACHEL: In the video Mal posted I was acting to make my boyfriend mad bc we got into an argument & he doesn’t want me around alcohol or weed bc my past. Prove me wrong. I could pass ANY drug test & have 🤣🤷‍♀️ We all know you’re drunk asf at a party just about every night. You’re getting so mad and defensive bc you know you are in the wrong. I’m only mad because you don’t take care of Emerson & your a piece of sh*t.

RACHEL: So now my sisters been talking about give custody of her kid to this girl she JUST met. Honestly b*tch needs help & im finna call DCS on her myself, at this point I have no f**ks given. I feel bad for Emerson.

RACHEL: Giving* & for the people that screenshotted that pls do show her. 🙂 She is a piece of SH*T & has left Emerson with us for months straight. Now since our argument she leaves her with nana & Nichole which was my baby sitter & friend but now she’s been talking to my family about giving her to Nichole. Like wtf 😂🤦‍♀️ B*TCH TAKE CARE OF YOUR KID. 👏

RACHEL: Emerson would literally say “mommy’s at work” when she would party for weeks at a time actually she really hasn’t ever had a stage in Emerson’s life she quit partying. This sh*ts ridiculous & I can’t stand for it. That is my NIECE & now I can’t even see her because of our argument 🤣 even though I’ve helped raise her. But a girl she just met can see her? F**k you b*tch. You finna get what you deserve. 🤷‍♀️

RACHEL: I deleted everything I said about Malorie because I’m the bigger person & I don’t need this negativity in my life. She will get what’s she deserves soon enough 🙌 Karamas [sic] a b*tch!! 💯

#TeenMom #YoungAndPregnant Malorie Beaver says her mom Stephanie reported her to DCS twice and wants custody of Malorie's daughter Emerson. It's quite the turnaround 3 weeks after Malorie was "quarantining away" from Emerson & Stephanie couldn't find her. https://t.co/k4seQCPSmv pic.twitter.com/CKIUbAeEYi

MALORIE: Hi I accidentally gave my moms number out so she gave mine out & im getting blown up help me.

MALORIE: Good job stephanie you win. I’m turning my phone off until I get this fixed because it’s going to cause me to have a mental break down. If you need me text me on Facebook.

MALORIE: The fact that you’re going to let your other child put my phone number all over social media without even asking me to remove yours first (I didn’t even know it was there) is absolute bull sh*t. I have people threatening to track down emerson & I and Kill us. Yet for some reason it’s “fine”. Y’all are horrible people & karma will bite y’all in the ass soon enough.

MALORIE: Would post Rachel’s number but that b*tch is too broke a worthless to even have a phone.

MALORIE: [Shared text messages from her mom Stephanie stating that Rachel was stranded in Florida without a ride back home.] 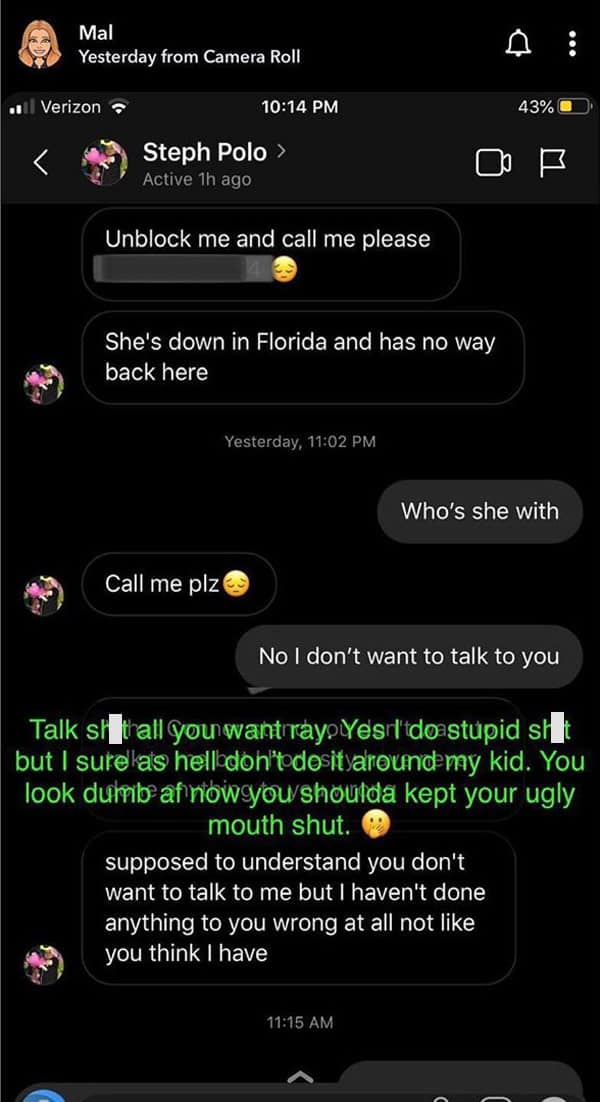 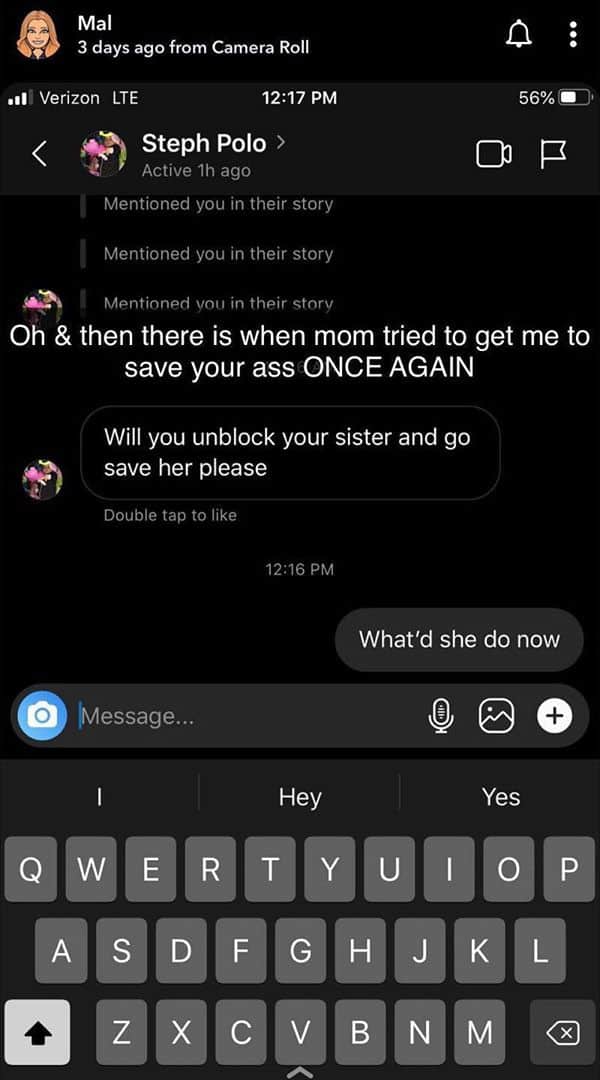 MALORIE: Hate to do it to her but she asked for it. Keep my daughters & my name out of your mouth. & how you gonna call DCS again when my case literally got closed a few days ago. From where your mother called on me. Yours is still open tho right? Makes sense.

Here is a gallery of screen caps shared by @teenmom.tea that includes a video posted by Rachel talking about being accused of smoking pot (or something like that?) — just swipe all the way through to watch the clip:

Part 1 of Malorie’s responses to Rachel, where she calls out Rachel for being drunk around Hazelee! (VIEW PREVIOUS POST) #youngandpregnant

Just in case you were curious, here are the posts that reignited the family feud a couple weeks ago:

MALORIE: Since y’all don’t believe me about morn calling DCS I’ll tell the whole story. My mother has always resented me because of my nana. DCS has been called before on Rachel & I because of the show. (We figure anyway) around October. My case was closed two weeks after & rachels is still going but almost over. Rachel had gotten another case worker since our first original case worker. (We had the same). Yesterday her case worker introduced her to her new case worker at around 2:30. Rachel told me today that mom went out on the porch to talk to her old case worker & Rachel asked “what are you talking to her about” and Stephanie said “don’t worry it’s not about you.”. At 4:30 yesterday I got a call saying a new case has been opened on me and they would be here this morning. Well the case worker couldn’t make it be of complications but did FaceTime me to talk. The person who called said I went out a few nights ago and left emerson with a complete stranger which was false. I left her with someone Stephanie didn’t want me to because she wanted the sitter to watch hazelee and she was mad about it and cussing everyone about it. She told this sitter that she was going to call DCS on me so she could get custody of em. Which makes no sense since lane would get her. Come today I had to bring someone to her house (no saying who out of respect for them) to get some money. And when that someone told Stephanie that I knew what she had done and to not speak to me (because I wouldn’t come inside) Stephanie simply said “she knows???” & would not speak to me. If it wasn’t her she obviously would’ve came outside & asked me wtf im talking about be that’s how she is. She knows she’s in the wrong & feels guilty. As far as i am concerned she is no longer my mother & she will not see emerson again. She put my daughters & my life on the line. She is a bitter and selfish woman and always will be I have lost all of the little respect I had for her. I don’t care if y’all believe me or don’t. I know the facts & I need her to be exposed for the monster she IS She is nothing but selfish & always has been. PS. Rachel’s case worker mom talked to and met yesterday is the same case worker who called me two hours later & who is now my case worker.

RACHEL: Don’t see why my names being brought into this I have an open case over failing for weed which I’ve been clean for over 4 months & it wasn’t around Hazelee. I get you got an opinion but keep my name outta this because your making me look f**king stupid like I’m a bad mom or some sh*t like NO they wanted to help me not smoke & put me on medication to help my emotions after losing the baby. All DCS is doing is helping me they are in no way trying to take my kid so let’s put that out there before people think I’m not stable. DCS is about to help me get an apartment & me get a job after recovering from my surgery. I have my baby 24/7 & why are you wording it like “mom was wanting the sitter to watch Hazelee” pretty sure I’m an adult and I wanted MY sitter to watch MY baby while I went to Atlanta to work on music & merch I’m coming out with?

On the legal front, the coronavirus pandemic has resulted in Malorie’s assault case being pushed back until August. In case you missed it, Malorie was arrested back in early February for assault after an altercation with her grandmother Janice Bollen.

Drew Brooks, the father of Rachel’s daughter Hazelee, is currently behind bars after he was found guilty of contributing to the delinquency of a minor and criminal impersonation last month.

Here are Drew’s most recent full-length mug shots as well as his previous mug shot photos for domestic assault and a probation violation: 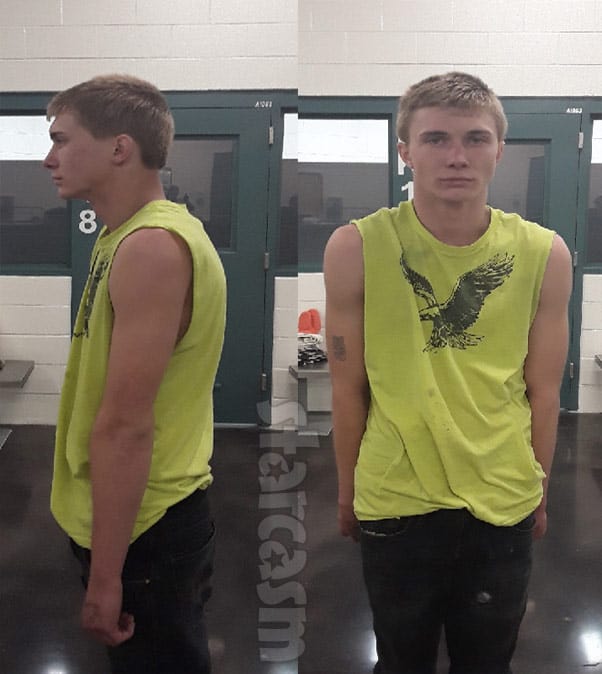