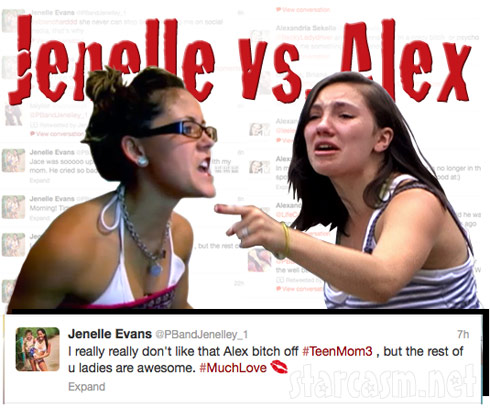 Teen Mom 2‘s Jenelle Evans and Teen Mom 3‘s Alex Sekella are both young women who are completely unafraid to use their outside voices regardless of where they’re at, and that includes when they communicate on their social media accounts as well. Alex and Jenelle blew up at each other on Twitter in a pre-Independence Day fireworks display back at the very beginning of July over Jenelle’s story about Alex on the mysterious nickel-generating site Sulia, with Alex eventually calling Jenelle a “stupid wh0re” before adding “ur personality is more fake than ur boobs,” and Jenelle tweeting at one point, “Be the bigger person and shut the f*** up.”

Things had been relatively quiet between the two outspoken young moms, but last night’s episode of Teen Mom 3 featured a very dramatic, near-violent scene between Alex Sekella and the father of her child, Matt McCann, in which the two were face-to-face screaming at each other, culminating with Matt taunting Alex, “Hit me! Hit me! Hit me!”

Things remained quiet overnight, but out of the blue Jenelle took to Twitter earlier today and proclaimed, “I really really don’t like that Alex b!tch off #TeenMom3 , but the rest of u ladies are awesome. #MuchLove [with a lipstick kiss icon]”

Of course that set off a maelstrom of responses. At this point I will just try to arrange the fallout in the most readable fashion, which is mostly chronological:

ALEX: I was a psycho b!tch last night but since then I privately received anger management n have been happy since the removal of matt 😀

ALEX: you know I think any mother would of been a psycho b!tch if u had just found out ur BD left ur kid home alone to go on a date with a girl

JENELLE: I mean she hashtags about me having #jenellemoments but she flips out more than me!

ALEX: In my opinion jenelle is jealous of the fact that she is no longer in the spotlight let her talk shit that’s the only thing she is good at:)

JENELLE: she never can stop bad mouthing me on social media, that’s why

FAN: so why stoop to her level and bad mouth her back?

JENELLE: I didn’t bad mouth her back, just think she’s a b!tch that’s all

JENELLE: yeah if she didn’t be a b!tch in the first place I would of liked her … But nope

FAN: @PBandJenelley_1 at least she has custody of her child & has since the beginning. Doesn’t seem like she has a drug or jail problem either…

JENELLE: people make different mistakes in life but it wasn’t a mistake signing jace over… Why? Becuz if he was with me when I did all the drugs and was with me in all the horrible neighborhoods I went to… Idk what would of ultimately happened to him so I kno I made the responsible decision and yes I use to do drugs and yes I’m over all the drugs and I never really partied I’m the type to stay home to have fun with friends, but I’m working my way up to getting him back and that’s all that matters

FAN: at least she’s got custody of her child.

JENELLE: All of u guys r so original, be more creative lmao heard this

FAN: [on Alex’s outburts] yeah that bugs me too but so did you fighting with your mom all the time but you’ve came a long way she will

JENELLE: I hope she does learn to control her outbursts on TV.

FAN: You are the lady [sic] person to judge anyone…I think Alex is a great mom

JENELLE: never said she was a bad mom, just a b!tch that’s all

FAN: if [Alex] thought he was on drugs she should have kicked him out immediately. And her hitting him was unacceptable. Period

JENELLE: wowwww, didn’t kno she hit him! lol someone just tweeted me what she said

JENELLE: [Nathan] has a better phrase for my little breakdowns, they are called #NellyMeltdowns

JENELLE: @mjfree [show producer Morgan J. Freeman] advise we don’t have our reunions together this time… #JustSaying due to the amount of immaturity level.

***Jenelle’s boyfriend Nathan Griffith also responded to a series of Briana’s tweets that have apparently since been deleted:

NATHAN: @BrianaDejesus_ we are working on that sweet heart thanks for your concern 😉

NATHAN: @BrianaDejesus_ but yet she let her child stay with a guy alone who left her kid by her #who’sresponsible?

NATHAN: @BrianaDejesus_ I’m done with this sh!t and there is a degree of being a woman and being a b!tch and b!tches start or fuel a fire… 😉

NATHAN: @BrianaDejesus_ everyone knows a child develops in early childhood, if you’re a b!tch a child will rebel, possibly to drugs

ALEX: EVERYONE thank u for ur support I appreciate it let the shit talker talk n we can just stop feeding her addiction for ATTN #ONELOVE #PEACE:)

So there you have it… for now.

On a side note, there is a bit of positive news that came of all this — there’s now an “official” parody Twitter account for Briana DeJesus’ stylish and charismatically no-nonsense mom Roxanne! Be sure to follow @MTVRoxanne!

The Jason Hoppy and Bethenny Frankel custody battle is finally over