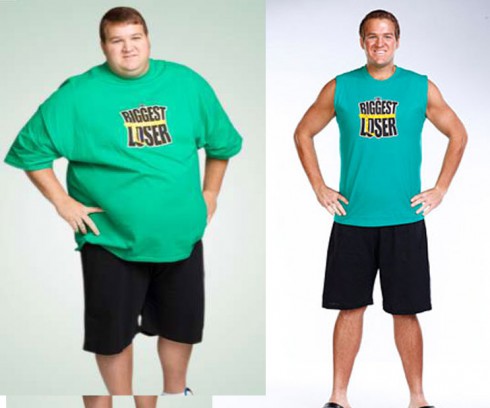 NBC’s Biggest Loser Season 10 winner Patrick House really needed the prize money. He lost his job as a sales rep this January and he told US Magazine “a lot of the money is going to pay back my family and friends that I borrowed from just to live this year.”

Patrick slimmed down 181lbs. and now only 219 lbs on his 6’2″ frame.  He lost 45.25% of his total body weight, which isn’t quite as extreme as the last few seasons where winners lost half of their size in the competition, but this might be better for long-term maintenance. Losing too much weight too fast often results in quick regaining.

In fact, regaining the weight has been an issue for many Biggest Loser participants, and a lot of that has to do with the fact that the real world is drastically different from the isolated fat camp on the show. Former contestant Kai Hubbard even spoke out this summer claiming that the the show encourages unhealthy extremes and caused her to develop anorexia.

House tells US Weekly that he’s combating the yo-yo effect by watching his portions, but not denying himself yummy treats like his mom’s pecan pie or his wife’s goat cheese pizza.