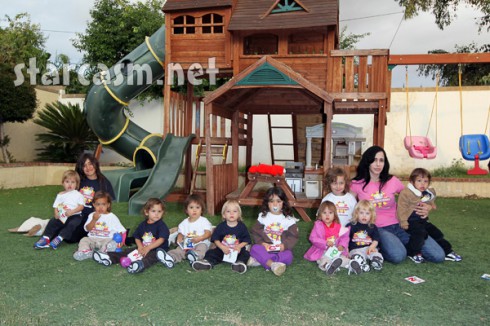 Octomom Nadya Suleman admits that living with her decision to have 14 children (and 8 in on go) is making her miserable, which is fair. But when talking to InTouch this week (via Amy Grindhouse), she took her honestly about her feelings too far. She says: “I hate the babies, they disgust me,’ and “My older six are animals, getting more and more out of control, because I have no time to properly discipline them.’

She goes on about the daily tortures of her life:

‘The only way I can cope is to lock myself in the bathroom and cry. Sometimes I sit there for hours and even eat my lunch sitting on the toilet floor. Anything to get peace and quiet,’ she said. ‘Some days I have thought about killing myself. I cannot cope. Obviously I love them… but I absolutely wish I had not had them.’

According to the Daily Mail, one of the picures published in this issue of In Touch shows one of Nadya’s kids eating dry-wall from their house.

From the start, we all knew this situation was very bleak, but it’s still unbearably depressing to watch it tear away from the fragile seams it did have, and swirl into deeper chaos and despair. These are 14 children who need food, shelter, discipline, and emotional support. That’s more than most stable, two-parent homes with good jobs can provide, but Nadya is still unemployed, single, and struggling with massive mental health issues. Add on top of that, she’s publicly declaring that she hates her babies! It would still be awful for her to hate them in private, but in public?

This is utter gloom and madness.

Not only is she emotionally over them, she literally has no money to feed them, and it’s a miracle they’re still in their house. When she spoke to InTouch (who no doubt tossed her a few coins for the photos) her bank account was overdrawn by $300. She’s currently on public assistance, but she has another media project coming up to help feed her massive brood for a little longer: she’s appearing on an HDNet dating show called Celebridate.

She may be horribly depressed and overwhelmed by her 14 children, but she definitely doesn’t have any self esteem issues when it comes to her levels of hotness. “Ever since I was little, I was aware that men wanted me and the hardest thing was keeping them away.”

UPDATE: Apparently Octomom is also taking part in a celebrity boxing match tonight against Jen Posner from 102.9 MGK in Philadelphia (who?), with Kim Granatell from RHNJ refereeing. Flyer from Kim G.’s BFF Tom Murro of celebritymagnet.com: 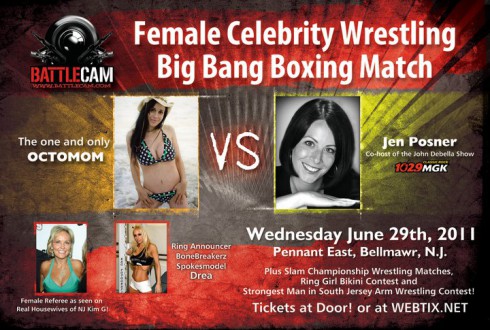 UPDATE 7/5/2011: Nadya Suleman is denying she ever spoke with In Touch Weekly.

According to Brangelina’s author Ian Halprin, philanthropist advisor Trevor Neilson made everyone Brangeloonie for Brad Pitt and Angelina Jolie