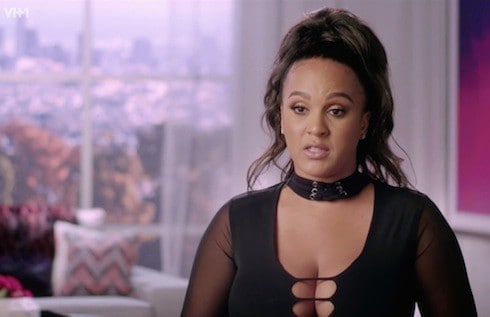 New Basketball Wives cast member Cristen Metoyer has become a focal point of the show’s drama over the past couple of episodes. The offense she took at the surprise makeover Evelyn sprung on her turned into a major point of contention, one that forced Evelyn into an apology but still resulted in bad blood.

Now, it looks like a new storyline is unfolding for Cristen–and it involves her half-sister Aja, who clearly feels the bad blood that existed between the two of them before they even joined the Basketball Wives Season 6 cast. Aja’s reasoning is straightforward: “Yes, Cristen is my sister,” she explains. “But my mom and Cristen’s mom legit hate each other. You think we’re gonna like each other?”

According to Aja, Cristen has been playing up her tears to try and win sympathy-and she’s been lying about a big part of her past. When Aja’s stylist friend Saniy’yah visits and describes her experience at the makeover, she mentions Cristen’s miscarriage. Aja, already frustrated at what she’s hearing, loses her temper and raises a different question: Did Cristen Metoyer have an abortion?

“I’ve lost a child,” Aja says, responding to Saniy’yah’s story in a confessional scene. “I’ve had a real miscarriage in my life. That’s not a thing to joke about….Why do you think I’m so mad? Because Cristen uses tears for sympathy.”

Though it’s not clear that Cristen was joking about having a miscarriage, it’s also clear that Aja has an extremely short fuse when it comes to her sibling. Back on the street with Saniy’yah, she gives vent to what sound like long-standing frustrations: “If you’re crying about your weight, stop eating Cheetos!”

Saniy’yah laughs, and Aja continues: “Stop crying about being fat, because that’s what you do! You like to be fat!”

No doubt the miscarriage / abortion storyline will play out as long as Aja and Cristen’s sibling rivalry is a focus of the show. Basketball Wives Season 6 continues Monday nights at 9 on VH1.

(Photo credits: Did Cristen Metoyer have an abortion screencaps via VH1)

Lindsay Lohan violence with a staff member at Betty Ford after a night out at a bar?