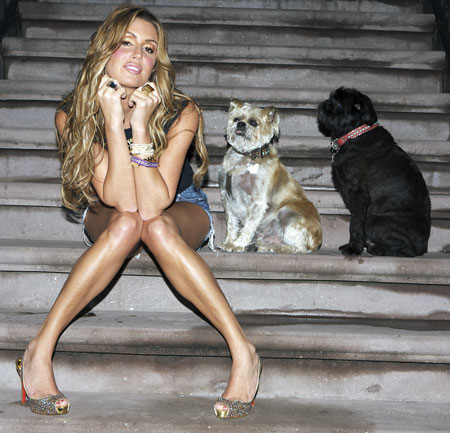 Rachel Uchitel will be exposing different “puppies” for Playboy magazine

The world’s most famous mistress will now be posing for the world’s most famous adult magazine.  As reported by TMZ the famous marriage-destruction-device slash party planner Rachel Uchitel has agreed to pose for Playboy.  This announcement comes on the heels of a text leak between her and Bones star David Boreanaz.  Of course David wasn’t her only married “friend,” she exploded on to the scene as Tiger Woods mistress number one.

The shoot is scheduled to happen in three weeks and Rachel will have the right to pull out anytime before then.  I’ve got a feeling she is going to stick with it.   As a matter of efficiency she can use Playboy as a means to show her goods to more cheating married men than she could possibly do on her own.  Readers of Playboy will not be receiving the Tiger special as she will only being showing her backside and top.

In an previous interview with TMZ she was asked if she would consider posing for Playboy.  The “Uch” was concerned about what her family would think.  REALLY!?!

“My family would have a heart attack.  I have to leave something to be desired.”

Not really Rachel it’s a little too late for that.  You might as well bare all and cash in while you can.  All aboard the Tiger Woods mistress bank roll train.