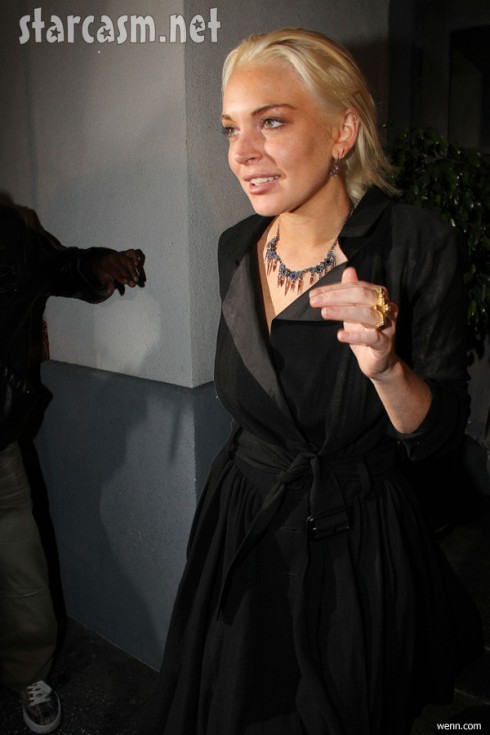 Lindsay Lohan was released from her house arrest sentence (that she was serving in her luxurious $7,000-a-month Venice Beach rental, and was allowed to have parties with alcohol whenever she wanted,) Wednesday morning at 11 a.m.

I guess she didn’t want to disappoint everyone who mocks and stereotypes her, because she beelined straight for a club, Lexington Social House, to lounge and smoke. A witness who was also at the new Hollywood hot spot Lexington Social House gabbed to Radar Online. According to them, Lindsay was pretty tame and sipped on sodas all night. The only real damage she did was to her lungs. From Radar:

“Lindsay and her assistant and a bunch of friends were hanging out at the club,” an eyewitness told RadarOnline.com. “She was sitting on the outdoor patio chain smoking and talking to some guys and girls about silly things, like what the perfect height was for a girl.”

Lindsay’s assistant handed her what looked to be sodas all night long, while she chatted away with her friends.

In other Lilo gossip, Gawker reports she’s now besties with techie rock star Sean Parker (a.k.a the dude Justin Timberlake played in The Social Network,) even though she got him kicked out of Bungalow 8 five years ago. A lot changes in five years. Bygones.

Lohan and her siblings partied at Parker’s ridiculous rented castle during Coachella this year. They may or may not have gotten buzzed together on coke, but they definitely scarfed down caviar worth more than most people’s houses, and wondered, in their satiated and ennui-addled states, what the poor people were doing.

Lindsay Lohan shares a controversial opinion about the #MeToo movement