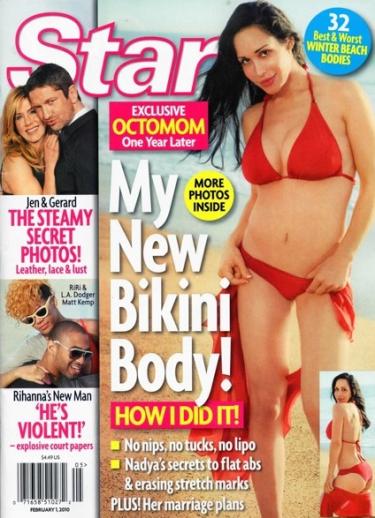 Octomom Nadya Suleman once carried eight babies in that flat belly. Scroll to the bottom of this post to see what she looked like when she was ready to pop with the octuplets.

It’s difficult to buy the claims that she hasn’t had had skin tucks or liposuction, because really, her skin expanded to an enormous size. It’s okay to own up to that. We’ve all seen Kate Gosselin’s tummy pre-plastic surgery, and she only put six babies in there.

Nadya Suleman has a history of trouble with truth, so it’s not big shock that she’s claiming to have reduced her tummy to this size on her own, but there’s no denying that she looks pretty awesome now. I’m guessing her weight loss secret is chasing 14 children all day and still finding time to hunt down the press. That type of running around shaves inches from the waist.

I’m going to go out on a limb here and salute her for her media endeavors. Nadya Suleman is crazier than a monkey on PCP, but she’s got to pay for her kids somehow. Remember all the public outrage everyone had when we learned she was unemployed and living off the government? Now that she’s gone and had so many children that even a high-paying regular job couldn’t sustain, we should all be happy that she’s getting money for posing in a bikini and giving interviews instead of an alternative where her children continue to live in squalor and narrowly eek by on the taxpayer’s dime.

In the list of alternatives, posing for Star magazine is probably the responsible thing to do. What do you think? We all know that poor decisions led to the possibly emotionally imbalanced, unemployed college student without a life partner to bear 14 children by age 33, but how is she handling her decisions now? 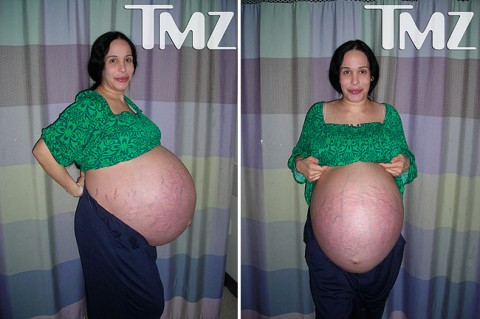 Gwen Stefani and Blake Shelton are reportedly ‘ready for a baby’