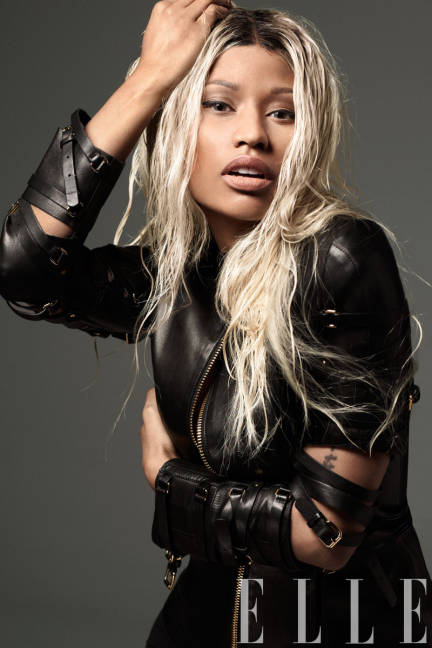 Nicki Minaj went bare on the cover of Elle magazine’s April 2013 issue, at least bare for her.

She’s still wearing a full face of makeup, but gone are the wigs, the super-pink lipstick, and the false eyelashes. The pop diva felt vulnerable with the new look, saying “To go in front of the camera, without pink lips or big ol’ crazy lashes — you know, nothing — I felt naked. It was scary!” 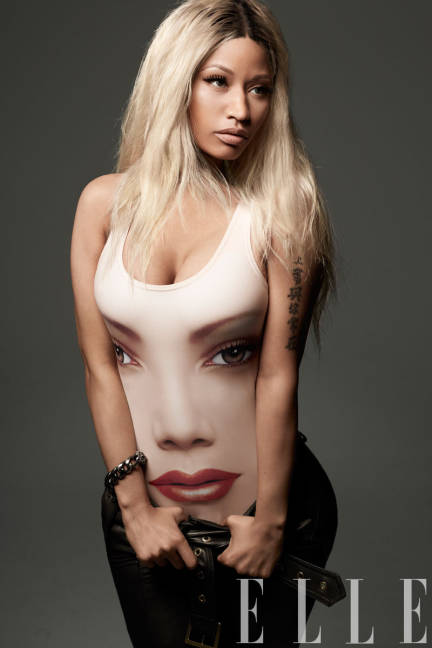 Nicki also opened up about her experience with mean girls when she was young, and offered advice to all women.

“I went through a lot of bullying early on. Girls made my life a living hell. We had come to America from a different country. My brother and I had accents. It was very tough. So I’ve always put up this wall— it was a self-defense mechanism growing up— because I was almost expecting people to attack me. And I still have it. It’s sad.

“My advice to women in general: Even if you’re doing a nine-to-five job, treat yourself like a boss. Not arrogant, but be sure of what you want— and don’t allow people to run anything for you without your knowledge. You want everyone to know, ‘Okay, I can’t play games with her. I have to do right by this woman.’ That’s what it’s all about.”

That’s actually some really great advice, and it reflects the feeling that comes through with her music.

Nicki also has a pretty grounded view of what “world domination” means to her. She says her first goal was being able to buy her mother a house, and once she achieved that she decided she really wanted to build an empire, but not just for the sake of personal power. Nicki wants to use her money to provide opportunities for future generations of her family, “I’m thinking of a legacy that I can be proud of and wealth that my grandchildren can use to go to college. So world domination — in terms of providing for my family – is absolutely my goal.” Grandchildren? Is Nicki thinking about having kids soon?

What do you think of Nicki’s new look? What about her advice?

PHOTOS – Why did Bethenny Frankel’s face swell so badly during pregnancy?