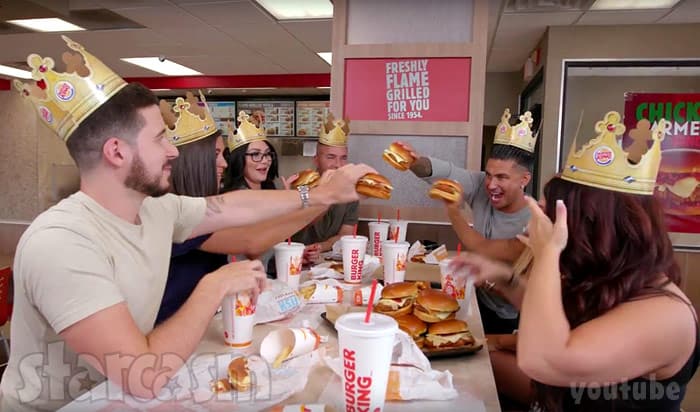 We finally know what the Jersey Shore cast was filming together in those photos leaked online — a Burger King commercial! Actually, it’s way more than a commercial as the entire crew (sans Ronnie) reunite and catch for more than five minutes — and it’s clear that the chemistry that made Jersey Shore one of the biggest reality show phenomenons of all time is still there.

The concept of the commercial is playing on the Italian themed weekly family dinners that the cast used to do on the show, only at a Burger King with their chicken Parmesan sandwiches. I’m not sure if the concept was initially to just make one or more funny 30-second spots, but it must have been clear right away that this reunion demanded more than just half a minute of silliness.

I confess that I am shocked by how much fun it was seeing the crew back together again! And it seems they might have been just as shocked as I was! The good feels had me reminiscing about our site’s long history with the show…

We started Starcasm not long before Jersey Shore premiered on MTV, and the show really transformed how I thought about reality television. After the premiere aired, there was all this controversy about how the show was misrepresenting Italian American youth, with the usual headlines about advertisers pulling out and petitions being started to take it off the air. As usual, those controversies and protests only helped to promote the show, and I tuned in because people were buzzing about it.

I started watching expecting some sort of Bad Girls Club meets Real World on the Jersey shore kind of thing, and I guess, in a way, that is exactly what it was. But, there was something about the personalities on the show that was absolutely, mesmerizingly entertaining! These young folks with all the ridiculous nicknames were just damn fun to watch!

“This is going to be huge,” I told myself, and immediately I began doing posts about the show — backgrounds on the cast members, etc. Getting on board the Jersey Shore train early was a huge boon for the site, and we still have a positive relationship with quite a few of the cast members on social media. (I should point out that our coverage wasn’t snarky and derogatory like most, but was more of a D-Listed kind of “DAMN this show is FUN!” kind of perspective.)

The biggest lesson I learned from Jersey Shore is that in the world of reality television, too much emphasis is put on concepts. Sure, certain great shows have succeeded in large part due to the concept of the shows (Big Brother, Deadliest Catch, 16 & Pregnant), but in the end the success is ALL ABOUT the cast. Are they interesting and/or entertaining to watch? Now I know to never to get excited (or dismissive) about any new reality show until I see the people actually on the screen. I can usually tell right away whether people are going to keep tuning in.

Jersey Shore sort of had a concept, but not really. A bunch of people in their early twenties staying in a beach house together on the Jersey shore? There was absolutely nothing innovative about that idea. But the personalities they found! PURE GOLD! And then you add in just how well they fit together (or didn’t fit together in a drama sense) — you cannot make that happen in a production board room. I suppose you could have a very talented casting director, but even then there is always a gamble as far as how the people will actually interact and look on screen.

All of that being said, I had pretty low expectations for any sort of reunion. I thought that so much of the lightning in a bottle that MTV captured with this show was powered by youthful adrenaline, hormones, and recklessness. But, as soon as Pauly D hugs The Situation in the very beginning of the clip and they joke around while ordering chicken Parmesan sandwiches, I started to get that old school Jersey Shore smile.

Then, when the rest of the cast joined them and they were sitting around the table laughing, joking, talking about having kids, getting married, etc. — it was so much fun! The very same chemistry is there despite their lives being completely different. 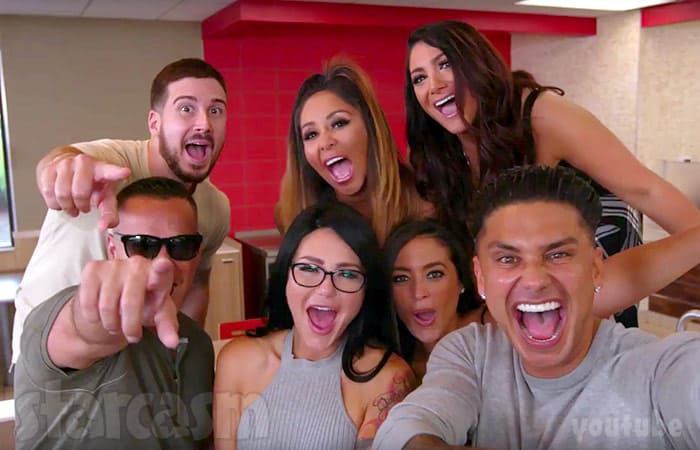 The gals met up recently to talk about the logistics of doing some sort of Jersey Shore reunion series, and I am SURE it was because they all felt the same thing when they got back together for this commercial! (They actually say as much in the video, so it’s not a huge insight on my part.) And I know MTV can see there is still a goldmine here — something that must be achingly appealing to a network that seems to be really struggling to come up with successful reality show concepts that don’t involve attractive young people competing against each other or pregnant teens.

The only way that a Jersey Shore reunion series wouldn’t work is if they overthink it on the conceptual end — trying to come up with some elaborate setting (or **UGH** a competition) as a reason for the cast to reunite. I think JWoww’s suggestion of an island getaway at some nice resort where they have a nightlife is perfectly simple. Don’t pull any bullsh!t by trying to get them to live in a similar house as the show, let them be who they are — very wealthy and very successful international celebrities — and make it swank.

The one thing I would worry about are the kids. I’m not sure how they would play into the cast’s dynamic. Should they be included or not? By default I would say yes, simply because authenticity tends to win out when it comes to reality TV. I’m imagining the families all staying at the same resort with some sort of communal space. I think the parental responsibilities could add a little humor and drama as Snooki and JWoww constantly battle whether or not to go out with the crew at night, etc.

Whoa! I really went off here! My apologies. I was just SOOO surprised by the Burger King video that it got me thinking about Jersey Shore, and those thoughts just spilled out on my keyboard.

Kudos to Burger King, by the way. The original concept was brilliant — reuniting the Jersey Shore cast to enjoy a family dinner together once gain, this time with chicken Parmesan sandwiches lol. But then for them to allow for it to be so much more — a five-plus minute reunion that turned out to be so entertaining, nostalgic, and rewarding to the show’s millions of fans, like me — I can only say “thank you.”

Does Snooki need rehab for her drinking problem?

PHOTOS Snooki and JWoww at the 2011 MTV Europe Music Awards