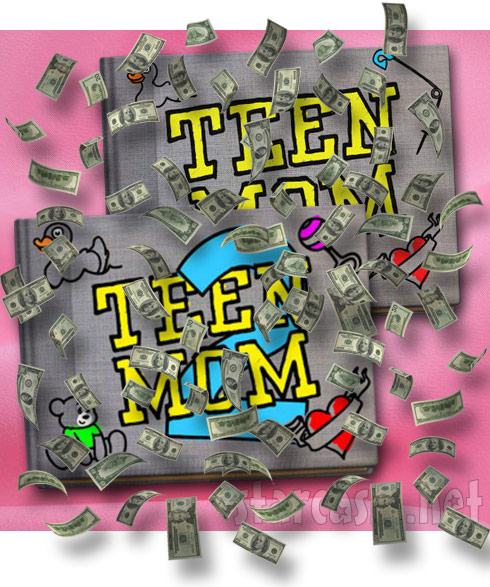 With the Teen Mom Season 4 premiere just around the corner the tabloids are running with all sorts of stories about our favorite young drama mamas this week! Star magazine (via Radar Online) claims to have an inside scoop on one of the most closely guarded secrets in all of reality television, how much money do the Teen Moms make?

According to one of their sources, Jenelle Evans “gets paid $75,000 a year and her mom gets paid $65,000: she calls her an overpaid babysitter.” The source adds, “She also gets a lot of gift cards to places like The Olive Garden from MTV as a bonus payment.”

From there the Star magazine sources get a little more vague. “Catelynn Lowell and (baby daddy) Tyler Baltierra have enough money to buy both of their mom’s cars,” a source says, “and Tyler paid for his sister to get a boob job.”

Another source says Teen Mom 2 star Leah Messer “believes she could make $20,000 from her wedding,” and “makes the most of all the girls in Teen Mom 2 because she held out the longest on her contract.” So I guess that means she makes more than $75,000, if we believe all of the sources so far.

Kailyn Lowry is mentioned, but only to say she is the only Teen Mom that still has a job. “All the others did it for show,” a source says.

Maci Bookout “was able to buy a house with her profits.”

So what about the dads on the shows? “The teen dads make a lot of money … the Teen Moms think it’s ridiculous because they don’t have to film nearly as much or do as much work,” the insider said.

I haven’t actually gotten my copy of Star yet, but it sounds like they culled together an article based on their infinite supply of Jenelle Evans sources and a few other friends of friends of a Teen Mom. My guess is that the Jenelle figure could be somewhere in the ballpark, and the rest is just chitter chatter from friends of friends.

If that’s the case, then the Teen Mom 2 stars are making way less than the original cast, based on Amber Portwood’s court testimony that revealed she made $140,000 per season in 2010. (She actually recorded two seasons in 2010, so her income that year was actually $280,000, according to her testimony.)

We should also remember that MTV almost certainly has put a great deal of money towards the childrens’ futures in the form of college funds or annuities. (A few of the girls have mentioned in the past that their child’s college is “taken care of” or something similar.)

To put things in perspective, I took the salaries of the cast of Jersey Shore and, based on that show’s ratings versus the Teen Mom shows, I figured the Teen Moms should be making $867,000 per season. (Click the link and scroll down for a full explanation of my equation.)

People sometimes get confused and leave angry comments about how these girls “get paid for getting pregnant and getting arrested and…” But remember, these girls get paid to bring in television viewers, which is something they do at a rate of about $3 million per episode – and that’s only counting the first time the episode airs! So whatever these girls do make, my guess is that MTV is getting a steal. Heck, these young women being on the covers of tabloids and making blog headlines week in and week out is worth more to MTV than some of the numbers mentioned above!

The issue of reality stars making a lot of money (similar to sports stars) often spawns heated arguments. What do you think? And if you think they are overpaid, then is it OK that the networks make millions from the shows?