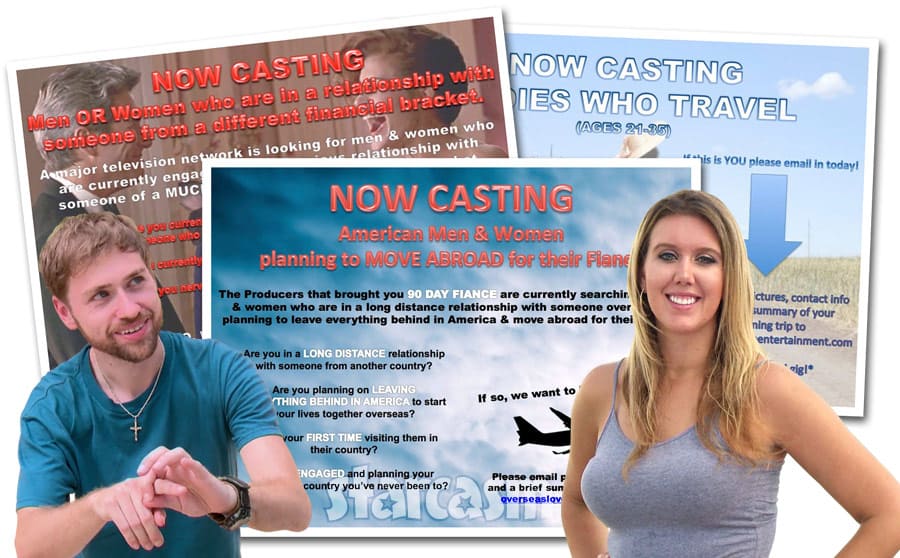 Sharp Entertainment has built a reality show empire on non-traditional romance — first with their ever-expanding 90 Day Fiance franchise on TLC, and later with their prison-based series Love After Lockup with WE tv. Earlier this year, TLC announced they have renewed all of the shows in the 90 Day Fiance franchise for new season in 2018, and WE tv just announced last month that they will be bringing back Love After Lockup for an extended second season. But, judging from their recent casting calls, Sharp is looking to expand even further with numerous new reality romance concepts — two of which appear to be inspired by previous Before the 90 Days stars!

As fans of the off-screen drama surrounding Before the 90 Days stars Paul Staehle and Nicole Nafziger are well aware, both Paul and Nicole are flipping the script on the K-1 visa process viewers are familiar with by leaving the United States to get married in their significant others’ home countries. Paul has ***SPOILER ALERT*** already gotten married to Karine in Brazil, and Nicole is hoping to marry her boo Azan in Morocco soon. It is believed that both Paul and Nicole hoped to then apply for a CR-1 visa, which is a different process for someone who is already married to a US citizen. (Unfortunately for Paul, it appears as though he and Karine have split — potentially for good this time.)

As we previously reported, TLC cameras were rolling on Paul and Karine for months as it was all but assured they would be coming back for another season. The only question was: another season of what? By getting married outside of the US, no show with “90 Days” in the title seemed to apply any more. So what does Sharp do? They work with what they have to create a brand new show! Here’s the casting call: 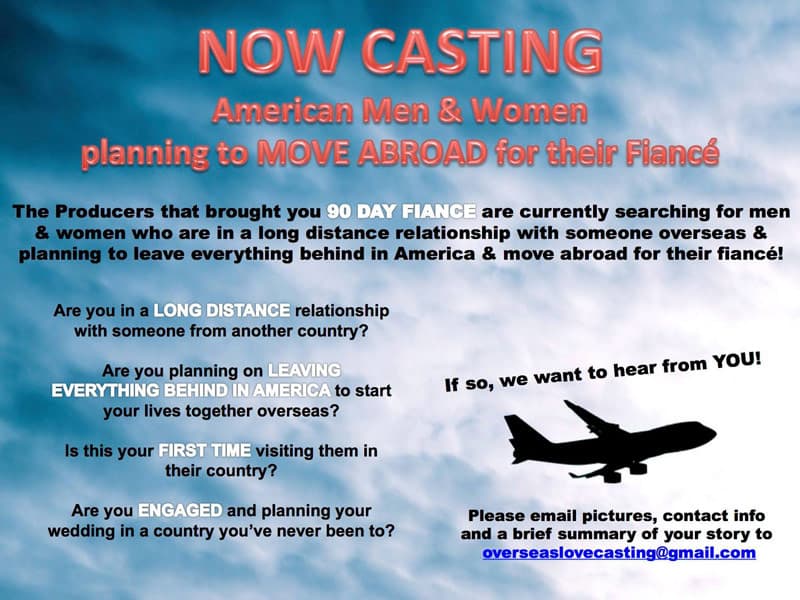 The producers that brought you 90 Day Fiancé are searching for men & women who are currently in a long distance relationship with someone overseas and are planning to leave everything behind in America to live with them in a foreign country!

• Are you in a LONG DISTANCE relationship with someone from another country?

• Are you planning on LEAVING AMERICA to start your lives together overseas?

• Is this your FIRST TIME visiting them in their country?

• Are you ENGAGED and planning your wedding in a country you’ve never been to?

If so, we want to hear from you! Please include pictures, contact info and a brief summary of your story.

What a brilliant move by Sharp! And they get the added benefit of not having to cast from scratch as they will have at least two bona fide reality stars already on board with Paul and Nicole! (Paul shared the image above on his Facebook page, by the way.) And let’s not forget Sean Hiler and his Haitian fiancee Abby, who are currently living together in the Dominican Republic. (Larry Passariello is also currently back in the Philippines with Jenny, but it is our understanding that Sharp is not filming him there — potentially because he is trying to make a go of it himself on Youtube.)

The end result, if this new series makes it to production, is that Before the 90 Days will continue to be mostly new couples which will feed all of the other shows in the franchise. If the couples continue with the K-1 visa process, they will move on to 90 Day Fiance and then potentially to Happily Ever After. If they opt instead to marry outside of the US, whter it is because they are having difficulty with the K-1 visa process or for other reasons, then they can move on to this new show. So what about situations like Before the 90 Days‘ Cortney Reardanz? Sharp’s got a concept for that too!

Check out this casting call: 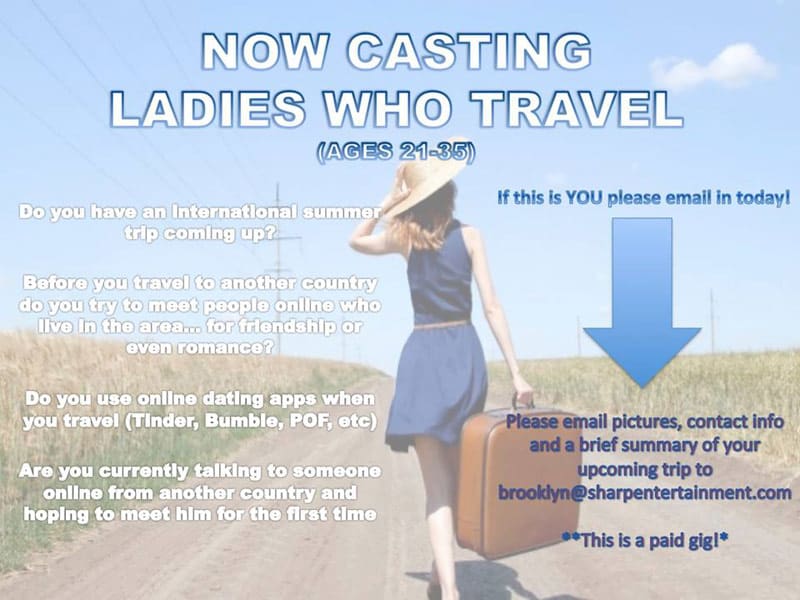 That is most certainly inspired by Cortney! In case you missed it, Cortney and co-star Patrick applied to be “Mayor of Cancun” last year. (Hmmmm, I wonder if the title A Broad Abroad is taken?) But that isn’t the only option Cortney has to keep her job with her former production company, here is another potential new home for Cortney from Sharp:

NEWLY SINGLE AND NEED TO HEAL YOUR BROKEN HEART?

Did you recently get out of a bad relationship? Were you ready to walk down the aisle and called it off? Are you newly divorced and need some fun in the sun? Are you done with all of the non-committal men out there who are just driving you crazy?

A rebound vacation may be exactly what you need!

A Major Cable Network is NOW CASTING fun, high energy single women that want to start fresh and press restart to their love life in the Caribbean! If this sounds like you, email us today.

Another entry for what I assume is the same show:

A Major Cable Network is NOW CASTING fun, high energy single women or groups of single friends for an exciting opportunity to find love in the Caribbean! A new show for a major television network is looking for women who are ready to pack their bags for the trip of a lifetime! Are you at a pivotal time in your life and ready for a radical change? If so, we want to hear from you!
*Must be 25 to apply*

What is ingenious about this concept is that it can easily serve as a catch-all for both the 90 Day Fiance franchise as well as the Love After Lockup show! How easy is it to imagine Cortney and Love After Lockup‘s Johnna DiGrigoli on this show? Heck, you could toss in Karine, Molly, Darcey, and Danielle as well! (I’m already addicted that show and it doesn’t even exist — yet.)

Obviously, Sharp should do the same for the guys as well. Who wouldn’t tune in for Mohamed, Garrett (the #hotfelon from Love After Lockup), Luis, Paul, Antonio, Jesse, and Jason Hitch living it up lookin’ for love at some Caribbean resort? (It felt like magic just typing those sentences with those names.) Unfortunately, casting was closed in December.

Another romance reality show concept that Sharp was casting for as recently as late last year is one based on economic class: 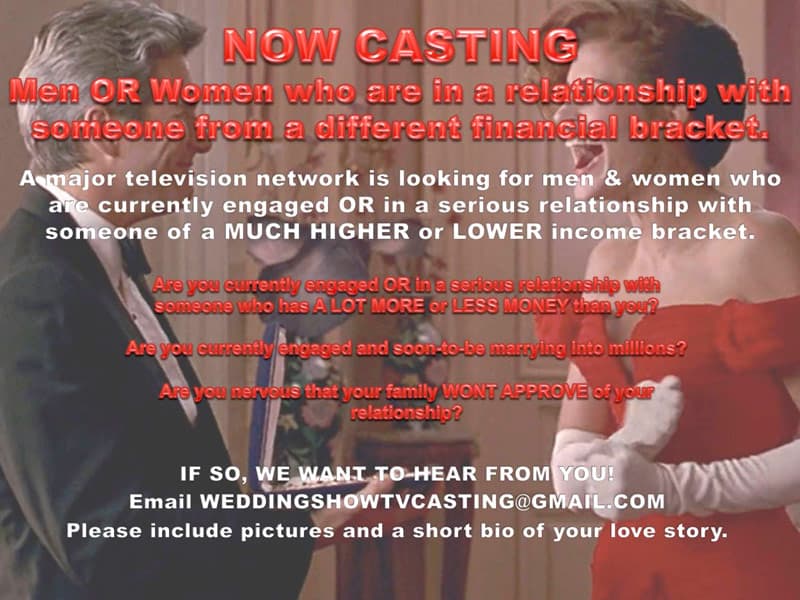 NOW CASTING NATIONWIDE! WOMEN & MEN who are in a relationship with someone from a different financial bracket!

A MAJOR CABLE NETWORK is looking for COUPLES!

• Are you living the real life Cinderella (or Cinder-fella) story and dating someone much much wealthier than you?

• Are you sharing your over-the-top affluent lifestyle with your girlfriend, boyfriend, or fiancé?

• Is one of you experiencing a radically different lifestyle because of your different financial backgrounds?

If so, we want to hear from you! STAR in a new series that shows TRUE LOVE is about much more than your income bracket!

Casting for that show closed in late December as well, so if Sharp is moving forward with it then it is already in production.

I don’t know about you, but Sharp is exactly that — sharp — when it comes to concepts and casting, so I cannot wait to see some of these new shows! And it is going to be sooooo funny to see some of the stars we are already familiar with finding new homes alongside co-stars we haven’t met going through the same thing! Is Sharp Entertainment publicly traded? If so, I know where I want my retirement invested…