The latest booking photo is for the misdemeanor larceny charges filed by Jenelle stemming from the incident in which Nathan allegedly took the couple’s car from airport long-term parking while Jenelle was on vacation in Florida. Since the car was registered in both of their names, the larceny charges were just for items in the vehicle that belonged to Jenelle, which she claims included “a car seat, bracelet, tanning lotion, clothing and some other items with a total value of a $1000.” 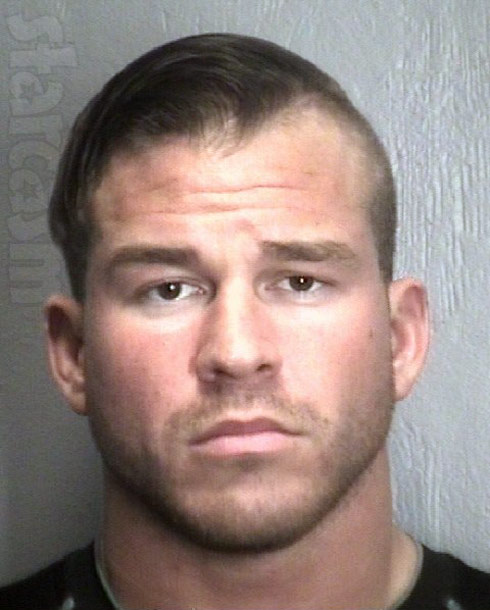 Nathan turned himself in on Wednesday, and although he faces up to 45 days in jail if found guilty of the larceny charge, he was only in “custody” for a total of about three minutes before being released on an unsecured bond. “Because it was a warrant — it was a violent North Carolina warrant — he shows up at the front desk,” Lt. Jerry Brewer of the New Hanover County Sheriff’s Office in Wilmington, NC tells Radar. “The front desk people said, ‘Ok come with us,’ patted him down and made sure he didn’t have any weapons, put handcuffs on him, walked him about 100 feet to the magistrate, took the handcuffs off and saw the magistrate. He was out yesterday afternoon.”

Nathan’s attorney, Megan Milliken, points out that it was Jenelle who actually issued the warrant, and not the police — an uncommon option that is allowed in North Carolina. “North Carolina is one of just a few jurisdictions in the United States where a private citizen can go to a magistrate and obtain a warrant on another private citizen,” Milliken stated. “That is what happened in this case.”

“Ms. Evans, after speaking to law enforcement, then went to the New Hanover County Magistrate’s office and swore out a warrant,” she adds. “What that means is that law enforcement did not issue this warrant. This was something that Jenelle Evans did on her own initiative.”

Milliken says that Nathan’s next scheduled court date is March 7.