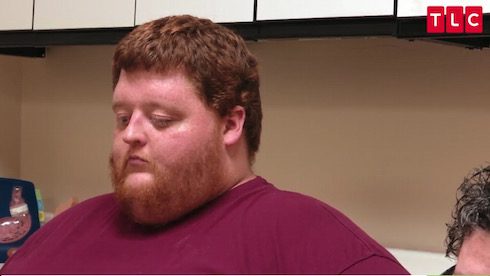 The My 600 Lb Life Justin McSwain episode follows a young man whose anxiety over his weight has gotten so bad that he’s been diagnosed with agoraphobia. Justin, a South Carolina native, gained several hundred pounds in just four years away at college — and now he almost never leaves his home, except to buy more food.

The synopsis for Justin’s episode references his “once-promising career,” and it looks like he is indeed the founder of McSwain Media, his own web development firm. Nonetheless, it appears that Justin has been limited in his employment opportunities thanks to his emotional problems. And those problems in turn appear to have begun with an emotionally abusive, fat-shaming stepmom.

Justin’s stepmom regularly accused Justin of “eating her out of house and home” when he was growing up. That’s hardly an original phrase or accusation — but Justin’s stepmom took things a step further by physically locking Justin’s food away and parceling out only what she thought was appropriate, when she thought it was appropriate for him to eat.

Understandably, when Justin moved out of the house for college, he decided that he would eat more or less whatever he wanted, whenever he wanted. He did well in school, but his eating habits resulted in an explosive weight gain. By the time he graduated, Justin weighed well north of 400 pounds, had received his agoraphobia diagnosis — and, most damaging of all, had changed his attitude toward food for the worse.

Here’s the first official look at the My 600 Lb Life Justin McSwain episode. The clip features Justin and a family member trying to pick up a rental car and make the thousand-mile drive from their South Carolina home to Houston and Dr. Nowzaradan’s practice:

Justin’s journey to Dr. Now won’t be easy—and major setbacks have him second guessing the trip. Will he push on? Tune in to a new #My600lbLife Wednesday at 8/7c. pic.twitter.com/pj4NjFUmnW

It soon becomes painfully clear that what should be a routine errand will instead become frustrating and embarrassing. The car Justin gets is not the one he requested, and it takes a whole lot of adjusting and squeezing for him to just get inside.

“I really can’t believe this,” Justin says. “This is the last thing I need. I’m trying really hard not to spiral and have a panic attack, but I’m beyond my limit at this point.”

Based on his emotional diagnoses, it’s no surprise that Justin spends a great deal of energy dealing with anxiety stemming from his weight. In the second preview clip currently available, Justin tells us his anxiety was “really high” at his first weigh-in after arriving in Houston. “I know I have to see where my weight’s at,” Justin says, adding, “And I’m hoping it’s in the upper 500s. Or low 600s at least.”

In addition, Justin explains he’s “really nervous” that Dr. Now will discover “some reason that might make [him] think he can’t help.” And, though Justin appears outwardly calm, his weight of 687.5 pounds does not do anything to help matters.

Unfortunately, that clip is not embeddable, but you can view it via Newsweek‘s preview of the My 600 Lb Life Justin McSwain episode here. As for the rest of the episode, Justin makes his My 600 Lb Life debut at 8 tonight on TLC.

My 600 Lb Life Bethany update: ‘I am truly sorry if the episode made you angry’