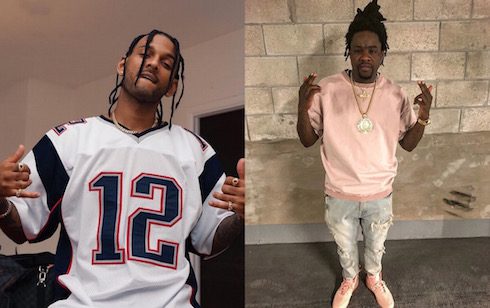 It’s definitely beef season for Love & Hip Hop Miami. Co-stars Prince and Khaotic are in the middle of a new feud — that is, unless the whole thing is just a strange string of misunderstandings. Prince recently called Khaotic out on social media, claiming he’d delivered a beatdown to a “goon” of Khaotic’s who’d tried to do the same. Meanwhile, Khaotic says he’s “reaching out to the streets” to try and locate Prince’s stolen chain, after Khaotic’s name somehow got entangled in the theft.

We’ll begin with Prince’s callout on his IG stories from a couple days ago. It sounds like he had a few run-ins on the street with either some of Khaotic’s fans or some of his crew. The first encounter was strictly verbal, with “one of [Khaotic’s] goons” making some disparaging remarks about Prince’s sexuality.

Not long after that is when things apparently got physical. According to Prince, somebody associated with Khaotic tried to deliver a beatdown on Prince while he shopped in an Adidas store. A second man stood back and filmed, but had to jump in when Prince took a kick to the face, then, per Prince’s account, “dragged [his attacker’s] ass.”

Prince called out both men plus Khaotic in the IG clip. Here’s the footage, via Reality TV News:

And here’s a transcript of Prince’s narrative from about the 50-second mark on:

Hey, Khaotic. You need some new soldiers, fam. Cause them short n!ggers you sent on me? Can’t fight. Your short n!gga tried to punch, kick me in my mouth — he got me. He kicked me in my mouth [shows bruise]. But he can’t fight. I dragged your ugly little n!gga in the Adidas store. I dragged his ass, n!gga. Tell him post that little clip that he tried to record. Before he had to come and kick me in my mouth because I was beating your mans up. Tell him post that little clip real quick. Shit’s crazy. N!ggas just tried to jump me.

For his part, Khaotic is going hard in the opposite direction. He just gave an interview to Miami radio station 99Jamz and claimed that there *is* no beef between Prince and Khaotic. He says he doesn’t know exactly where the bad blood between himself and Prince came from, but that he wants to stop it flowing.

Khaotic says he’s “reaching out to the streets” to help Prince get his chain back, and that he already “got a couple hits back.” He called Prince his “co-worker” and said that he “doesn’t like being mixed in allegations” now that his name has been involved in Prince’s missing chain.

Khaotic went on @99jamzmiami Radion Station And Spoke about the Beef between Prince and Him, He also said that he will help prince find his Chain. @khaotic305 #khaotic305 #prince #lhhmiami #lhhmia pic.twitter.com/CUVpkQSSlf

We’ll have to wait for more new episodes to find out if the Prince and Khaotic feud has to do with a storyline, or is just good, old-fashioned dislike, a la Miami Tip and Jojo.

LHHMIAMI The beauty of Amara La Negra’s hair, explained by Amara herself