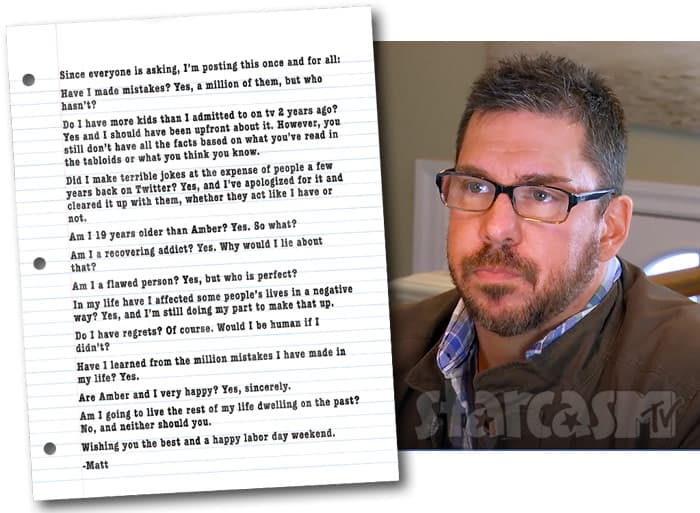 Teen Mom OG star Amber Portwood’s fiance Matt Baier has been in the media spotlight ever since his identity was revealed back in December, 2014. But, no matter how bright the light, it has still been difficult to penetrate his incredibly shady past that includes at least five and as many as nine children with multiple women — many of whom have since come out publicly to denounce him as a deadbeat dad and a con man.

In hopes of finally putting an end to the deluge of negativity, Matt returned to his now-infamous Twitter account to share a lengthy statement–a confessional self-interview–intended to clarify his shady past. Here it is in its entirety:

Since everyone is asking, I’m posting this once and for all:

Have I made mistakes? Yes, a million of them, but who hasn’t?

Do I have more kids than I admitted to on tv 2 years ago? Yes and I should have been upfront about it. However, you still don’t have all the facts based on what you’ve read in the tabloids or what you think you know. 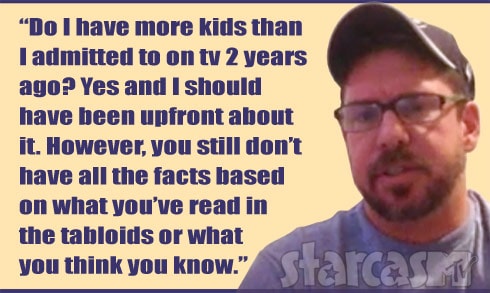 Did I make terrible jokes at the expense of people a few years back on Twitter? Yes, and I’ve apologized for it and cleared it up with them, whether they act like I have or not.

Am I a recovering addict? Yes. Why would I lie about that?

Am I a flawed person? Yes, but who is perfect?

In my life have I affected some people’s lives in a negative way? Yes, and I’m still doing my part to make that up.

Do I have regrets? Of course. Would I be human if I didn’t?

Have I learned from the million mistakes I have made in my life? Yes.

Are Amber and I very happy? Yes, sincerely.

Am I going to live the rest of my life dwelling on the past? No, and neither should you.

Wishing you the best and a happy labor day weekend.

Well, he sure said a lot without really saying anything. Matt did state that he has “more kids than I admitted to on tv 2 years ago,” but that’s really vague. And he could be referring to when he “admitted” to having two children initially. (I think it was two to start with, right?)

And what’s up with issuing a statement to clarify things “once and for all” but including the sentence: “However, you still don’t have all the facts based on what you’ve read in the tabloids or what you think you know.” Just what are the facts?

Matt did “admit” to making “terrible jokes at the expense of people a few years back on Twitter.” It’s not like anyone believed that he didn’t make those jokes–although I suppose he did just eliminate the possibility that he would claim someone else wrote all the tweets under his account, like he did with the Farrah Abraham woo pitchin’ tweets.

To me, Matt’s non-specific confession seems like something that would go over real well in person and face-to-face, especially if you had the sad, sincere face to sell it. But without that salesmanship, if you look at the words as just words, there’s not much there — right?

Of course, I could be waaaaay wrong, as evidenced by some of the positive responses to Matt’s statement on Twitter:

Ppl are quick to judge, but as long as you are honest with Amber that’s all that matters. Live in your truth!

[Matt] and [Amber] are my two favorite people. they keep it so real and don’t give a crap about what anyone has to say ✊?????

[Matt] don’t let the media or fans get to you, only you know the real truth we go by what’s shown on tv who are we to judge. Good luck!

You guys keep doing you,Your doing great.At the end of the day you have each other’s backs that’s all that matters

someone will alwayz have something to say about u two,u guys look happy so thats all that matters

I just want to let you know, I think you handle everything so well. I would of lost my mind with everything ppl throw at you ????

love you on teen mom OG! You and amber are relationship goals!! Boston strong