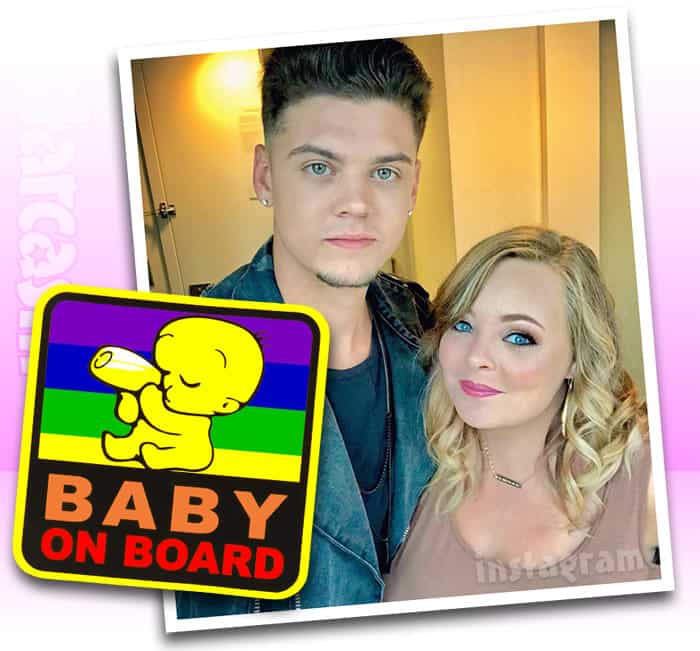 Teen Mom OG couple Catelynn and Tyler Baltierra revealed back in September that Catelynn is pregnant again, and moments ago the couple shared a gender reveal announcing whether or not Nova will have a little brother or a little sister.

The reveal came via Us Weekly, who enlisted the aide of Nova to break the news. Nova is seen in a photo holding a large sign that reads: “I am such a pretty little girl my mommy & daddy wanted another one to be their world. So, as our world gets a little bigger, I just can’t wait to be HER big sister.”

In other words, IT’S A GIRL! That confirms a report from The Ashley back when the pregnancy was first announced.

Here’s an edited version of the photo posted by Tyler in which the “HER” reveal is masked by an emoji — just head over to Us Weekly using the link above to see the unedited pic:

Excited to have Nova announce our SHOCKING GENDER REVEAL #LinkInBio

Tyler has been very vocal about wanting to have a little boy, and it appears as though Catelynn joined him on #TeamBoy. “Tyler knew the sex before I did,” Catelynn tells Us Weekly. “When we did our gender reveal, I was so shocked I almost cried because I wanted a boy so badly.”

But, Catelynn has had time to let the news sink in a bit, and she has a new take on the news. “I’m super excited it’s a girl now,” she adds. “Since our miscarriage, I just am thankful to get another chance, and as long as it’s healthy, that’s all that matters!”

And just because the stork will be delivering a girl this time around, that doesn’t mean it won’t be back with a little blue bundle in the future. Catelynn says that she and Tyler have already “talked about trying again.”

Congratulations to Tyler and Catelynn — and big sister-to-be Nova! We look forward to meeting the newest addition to the Teen Mom OG family!

Nick Lachey and Vanessa Minnillo are expecting their first baby!