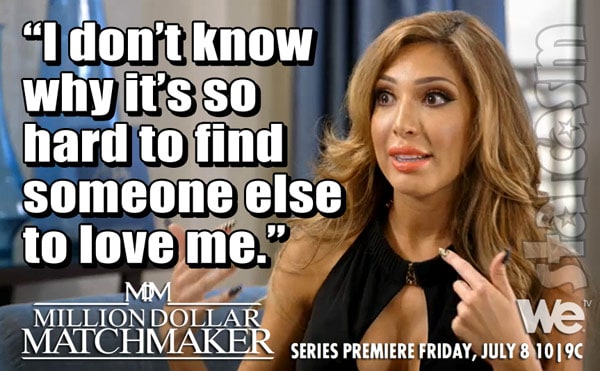 The popular luxury love seeking show Millionaire Matchmaker ran for eight seasons on Bravo before show star Patti Stanger announced in July that she was leaving the network for a new home. That new home is WEtv, and Patti’s “new” show has the slightly different title Million Dollar Matchmaker. In the first preview clip for the show, premiering on July 8, we are introduced to some of the newest batch of wealthy clients looking for love — including Teen Mom OG star Farrah Abraham!

“I don’t know why it’s so hard to find someone else to love me,” an emotional Farrah says at the beginning of the clip. In another non-embeddable preview, Patti can be heard expressing concern over Farrah being a parent with a sex toy line featuring molds of her actual body parts. “You have a daughter. I don’t want her finding your vaginas that you’re sending out UPS!” 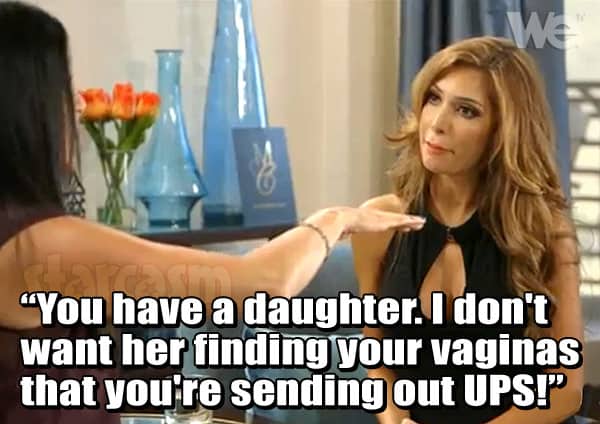 I assume Farrah’s episode was filmed while she was on break from boyfriend Simon Saran? I recently saw #Farran together at her Froco frozen yogurt restaurant grand opening, so I am guessing Patti was unsuccessful in her attempts to find Farrah a match — unless, of course, she was extremely clever and had Farrah go on a date with Simon! Hmmm…

Although the basic concepts of the shows are nearly identical, Patti explains in the clip that Million Dollar Matchmaker will have some subtle differences from its predecessor, Millionaire Matchmaker.

“You think you know the way I work, but honey, you ain’t seen nothing yet!” Patti says. “I’ve upped my game and taken over an exclusive resort,” she reveals. “I’m taking the toughest cases I’ve ever seen in my matchmaking history and putting them in a week-long intensive retreat where I am giving them love lessons and making them face reality.”

Patti adds: “My goal is to find them love that will last a lifetime…By the time they leave, they will know all about what love is, they will have their perfect person, and they will ride off into the sunset with them.”

Here’s the full scoop on Million Dollar Matchmaker from WEtv:

The world’s most renowned matchmaker and favorite love guru, Patti Stanger, returns with millionaires from her past and present as they bring their relationship problems and issues to the exclusive “Millionaire’s Club” for a final chance at finding love in the new WE tv series, Million Dollar Matchmaker, premiering Friday, July 8th at 10|9c. In an effort to see if love will once and for all prevail, Patti helps some of her unmatchable millionaires….and if Patti can’t help them find love by the end of their stay, no one can!

Each episode features two wealthy clients checking into the breathtaking luxury property in North County San Diego, Harrah’s Resort Southern California, where they quickly, and unwittingly, embark on their “love lesson,” custom tailored challenges designed by Patti and her team to reveal what they are doing wrong. Patti then meets one-on-one with each millionaire for a “reality check,” an in-depth review of his or her surprise date, where she delivers her particular brand of tough love, with sometimes brutally honest feedback. Finally, Patti will introduce each high-profile client to her two matches. If all goes well, the millionaire and his or her potential match will be on their way to happily ever after.

Rounding out the Millionaire’s Club team of experts is Candace (“The Flirt,”) a graduate of Northwestern University School of Law, who also holds a degree in psychology. Candace is a natural when it comes to pairing partners…when the former beauty queen is not keeping the men for herself! David, founder of FindingCupid.com and proclaimed “Romance Enthusiast,” brings his passion for love and belief that everyone deserves happiness to the Club. And after a brief respite from the club, Destin and Rachel (“The Power Couple”) are ready to return in order to help big-bucks clients find true love. This dynamic duo and fan favorite couple from Patti’s past are a dream team…when they aren’t butting heads.

Clearly, Farrah is a bit of a polarizing figure, and her inclusion on the show has already caused some controversy. Patti responded to one detractor on Twitter:

How about u watch before you throw #shade! What you see you wont believe. I make people face thier issues head on. https://t.co/yUczE6NwQI

And speaking of Farrah and Patti on Twitter, the seed for a potential partnership between these two ladies might have been planted waaaaaaay back in 2012:

VIDEO Farrah Abraham says MTV is ‘asking me to do a piece for the reunion,’ calls producers ‘spineless’