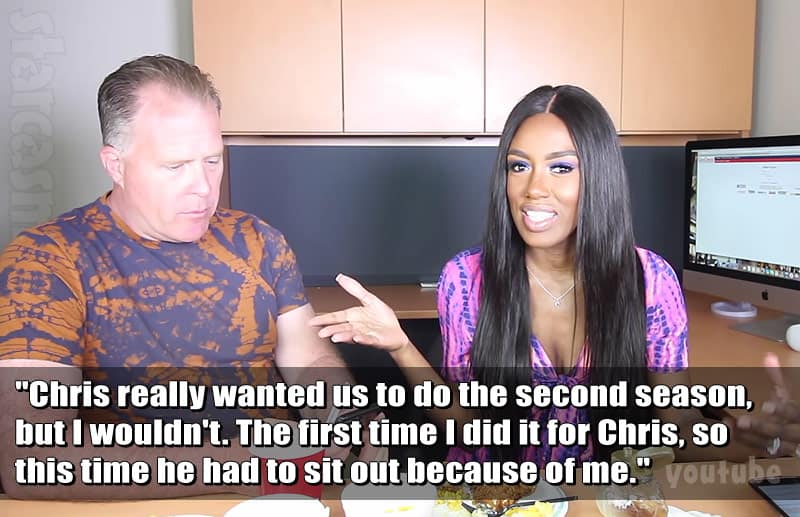 90 Day Fiance couple Annie and David Toborowsky will be back this Sunday when Happily Ever After Season 3 premieres on TLC, but this time around the couple will not be sharing the screen with David’s best friend as Chris “ATM” Thieneman and his wife Nikki chose not to return. Their decision seems to have had more to do with editing control than exposure, however, as the couple continues to enjoy the spotlight on social media — including a recent Youtube video in which they answered fan questions about their experience making the show.

Actually, I should say that the video is about the couple’s experience making “a” reality show, as they avoid using a specific title just to be careful. “It comes after 89 and before 91,” Chris jokingly clarifies at the beginning of the video:

In the 30+ minute clip, Chris and Nikki enjoy a meal from Kentucky Fried Chicken as they informally chat and answer questions from fans in no particular order. Chris is super casual, sporting a tie-dyed t-shirt and green jeans. Nikki is Real Housewives ready in a colorful romper with matching eye shadow. (I swear she seems like a much more tolerable version of Porsha Williams. If Bravo ever decides to expand their most popular franchise with The Real Housewives of Louisville, then Nikki most certainly has my vote!)

The video is impromptu and kind of all over the place as far as continuity, so I think the best way to summarize is to bullet point some of the highlights for you. Of course, there is a lot in the video not included below, so you need to watch it if you don’t want to miss any of the tea!

And the bullet point recap:

• As Chris and Nikki have stated before in regards to the infamous Thai massage request scene, a lot of what happens on the show is guided by producers. They insist that there is no literal script involved, but both Chris and Nikki are very adamant about how heavy handed producers are in suggesting what cast members do and say. And they also point out how powerful editing can be when there are multiple takes, etc.

As far as the afore-mentioned Thai massage scene, Chris once again points out that it was a producer’s idea and that he regrets going along with it. Both he and Nikki say that Nikki expressed her opposition at the time, and that she was right.

• One scene that was not scripted or guided by producers was the explosive scene involving Nikki’s brother, Antonio Ticer. That was the real deal, and there was apparently even more that producers left out — including drunk David verbally attacking Nikki.

Speaking of Nikki’s brother Antonio, Nikki clarifies in the video that Antonio isn’t actually her brother! Chris says that Antonio identified himself as Niki’s brother early on and producers needed him to stick with it for continuity.

• Another manipulated scene was the one in which Nikki was shocked to find out that Chris had agreed to be Annie’s sponsor. Nikki says she “absolutely knew” that Chris was sponsoring Annie and that she only acted like she didn’t know for the cameras because producers thought that was a good story. She does admit, however, that neither she nor Chris knew that the sponsorship meant that they would be financially responsible for Annie for ten years. “I didn’t read the fine print,” Chris admits.

• “Fine print” you say? That leads us to one of the most spoilerish insights from the clip as Chris reveals that David wanted to become an Uber driver and asked him to co-sign on the purchase of a car! “He said he wanted to get a job at Uber,” Chris recalls. “I told him ‘I have plenty of jobs for you,’ but he wanted to Uber.”

Chris was willing to agree to co-sign as long as David was willing to have the car wrapped to promote one of Chris’s businesses. Apparently, that is something Uber doesn’t allow (which makes sense), but David never said anything about that to Chris. Eventually, Chris found out about the contractual caveat from someone else. “So I put a kibosh on that,” he said of the David car deal. It’s unclear if David was able to find another way to get a vehicle and follow in his 90 Day Fiance co-star Mohamed Jbali’s footsteps as an Uber (or Lyft) driver.

• Chris and Nikki state once again that they were not paid for their appearance. (They previously talked about that and also revealed exactly how much David got paid to be on the show.) “I think they bought us a dinner one time,” Chris says. He adds that the comp meal was when they were filming the scene in which Nikki told David that he should return to Kentucky instead of continuing his stay in California. “Little did you guys know,” Chris spills, “we were already in Kentucky. [We were] sitting in a restaurant on Frankfort Avenue in Louisville Kentucky pretending to be in California.” FRAUDED!

• Nikki is a HUGE fan of 90 Day Fiance, and she’s the one who suggested to Chris that David should apply to be on the show — which he did. She says that they started filming but it wasn’t really clear whether or not David and Annie would actually be featured on the show because they were having issues with the K-1 visa process. That sparked a very interesting recollection from Nikki in which she seemed to say something she shouldn’t have:

NIKKI: Chris had to step in and have his writers write how [David and Annie] met — ooo sh*t, did I say that?”

CHRIS: I didn’t. That was David.

Perhaps it is my overactive imagination, but my reality show sixth sense was tingling and telling me this might be a reference to Antonio’s claim that Annie was a prostitute when she met David. In the preview trailer for the upcoming season, David’s daughter confronts Annie about that rumor, so perhaps we will know more soon!

Back to Chris and Nikki’s video…

• Some of the best parts of the clip were Chris’s reflections on David and their friendship. He says he has known David roughly 13 years and that David used to have his own blacktop company and he would bid on some of Chris’s construction projects.

Chris says he’s now more aware of David’s “bullsh*t,” even though David seems completely oblivious to that fact. “Being friends with David is like herpes,” Chris jokes at one point. “Once you’ve got herpes it never goes away.” 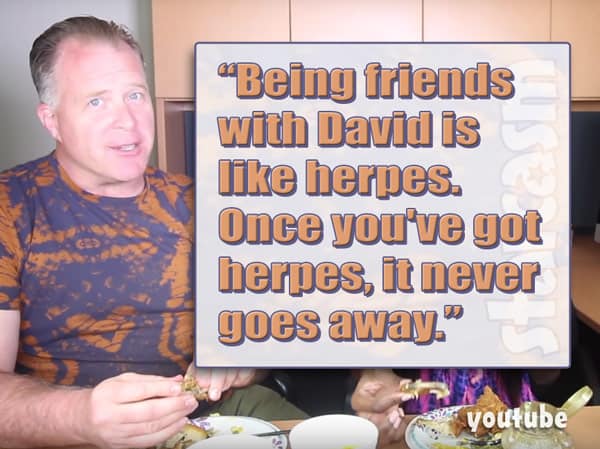 • So would Chris and Nikki appear on the show if they had it to do all over again? “Chris really wanted us to do the second season, but I wouldn’t,” Nikki reveals. She then laughs and adds: “The first time I did it for Chris, so this time he had to sit out because of me.”

Despite her aversion to returning, Nikki has no regrets about doing the show. “I don’t regret anything,” she says. “It was a learning experience. I actually felt like we learned a lot from it, and I feel like, too, Chris finally gets to see what I’ve been saying since I met David — that his friends just, you know, he’s just used to hand outs. And that’s OK, you just have to know your limits when it comes to certain friends. You have to know your boundaries with certain friends.”

The video is actually part one of two, so I will update with the second part when they post it. I doubt I will be doing a recap of that one though. I have no regrets doing this first recap, but… 😉

You can catch up with David and Annie when 90 Day Fiance: Happily Ever After returns Sunday, May 20 at 8/7c on TLC.