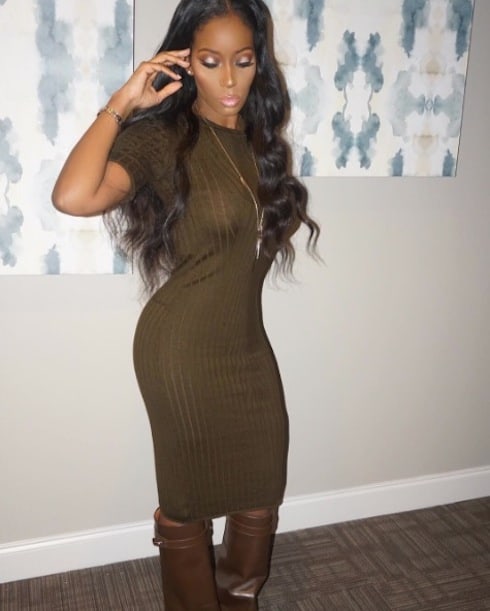 Though we’re only three episodes in, Love and Hip Hop Atlanta Season 5 has already shown us a full slate’s worth of drama. Last week, the news that Scrapp DeLeon would be heading to prison (potentially for quite awhile: click here to read all about Scrapp’s sentence) led to some heated conflict between current girlfriend Tommie and Scrapp’s baby mama Tia Becca. Now, thanks to a behind-the-scenes look, we know that the dislike the two have for each other is definitely for real!

Their off-camera confrontation came during this week’s episode of Check Yourself, the web-only VH1 series in which the Love and Hip Hop Atlanta Season 5 cast offer commentary on a scene from the most recent episode with no other cast members around. The Episode 3 Check Yourself played this isolation to beautiful effect, as we got probably the most hilarious insult of the season so far, courtesy of Tommie’s thoughts on Tia Becca:

“She just look like a pocket p*ssy walkin in,” Tommie says, while laughing. “Like, you just heat her up–she’s microwaveable, oh my God. Like, what the f*ck?”

It should come as no surprise, then, that the two women didn’t agree on how to treat Scrapp after he turned himself in for his prison sentence, either. Tia Becca’s position is pretty clear: “Scrapp, f*ck your position. You are so weak, I cannot even believe you brought [us] there for that.”

But Tommie finds her far too cold: “Like, if a b!tch won’t even send you a pack of noodles in jail, and this your baby mama, and you been holdin’ it down, you know what I’m sayin….I don’t like that.”

A new episode of Love and Hip Hop Atlanta Season 5 airs tonight at 8 PM on VH1. If you plan on live tweeting during the episode, see if you can get #microwaveablepocketp*ssy trending!