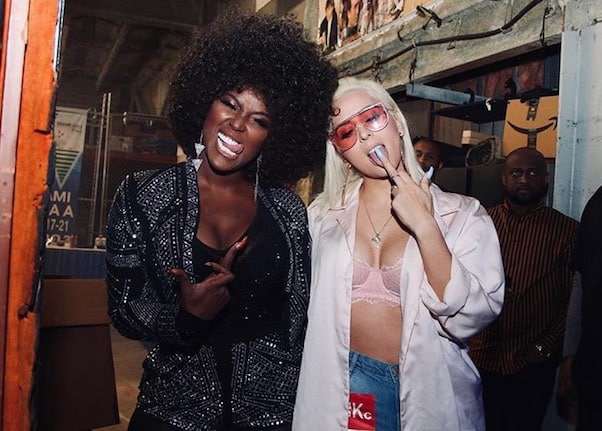 Love & Hip Hop Miami star Veronica Vega is still dealing with the fallout from her use of the N-word during the show’s inaugural season, but it sounds like Veronica’s come a long way since then. In a new interview with VH1 — one in which questions of Veronica Vega’s nationality and ethnicity were also addressed, if peripherally — Veronica said she’s learned plenty from the controversy, and wouldn’t be so quick to use the word again.

Veronica dropped the N-word into a couple of different scenes during LHHMiami Season 1, and always while discussing her own experience suffering discrimination. Veronica clashed with several of her cast mates (most notably Amara La Nega) who questioned whether Veronica Vega’s nationality and / or ethnicity was Afro. Veronica has said several times that her great-grandmother was “African”; at the Love & Hip Hop Miami Season 1 reunion, she responded to another question on the topic by saying “I’m black. Absolutely.”

Now, Veronica — who, it should be noted, is always more thoughtful in interviews than she or anyone else can be on reality TV — has revised and extended her reunion remarks. Speaking to VH1, Veronica described what she’s learned as a result of the ongoing racial conversation her words stirred up, telling the network she now understands “it’s very important to be considerate” when sharing her beliefs.

Here’s the question and Veronica’s remark in full; you can read the whole interview here:

VH1: Last season, you took a bit of heat after the n-word controversy. How have you grown from that and changed this season?
Controversy doesn’t scare me so I don’t know if I’ve changed a lot as a person more than I have learned that everyone doesn’t have the same beliefs and the same experiences and the same lifestyle and the same background and culture and it’s very important to be considerate of everyone else and their upbringing and their life when expressing things about yours. It’s definitely taught me to be more compassionate about other people. If anything, I’ve grown in a compassionate way and just being to understand that we’re all very much alike, but we’re very different, too as far as where we come from and what we’re taught. I just see things different. I realize that my neighborhood, where I’m from, my family is not the only family in the only neighborhood and the only upbringing that exists, you know? So you have to be a little more sensitive to those things.

Veronica was also contrite and reflective elsewhere in the interview, when asked what she “wish[ed] she knew” before she started filming LHHMiami Season 1. “To be careful with how I articulate what I want to say,” Veronica answered, “because…[it’s] not necessarily bad, but the way that you say it and how you deliver that is really important. So, to be careful with delivery because how you deliver something is how someone takes it and how they’re able to change from it or how you’re able to find a resolution, but delivery is everything.”

Judging by the recent photo at the top of the article, Veronica has buried the hatchet at least partway with one of her biggest detractors. It’s a good thing humanity-wise, but whether or not that will make for good reality TV is a different matter.