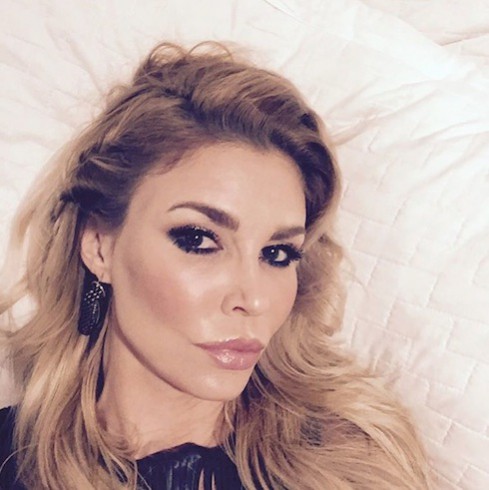 The Brandi Glanville feud between former co-stars Lisa Vanderpump and Kyle Richards only ever seems to get more and more enflamed. The latest move? Brandi has gone ahead and added a new segment to her weekly podcast: it’s called “Brandi Fires Back,” and it does exactly what you’d expect it to. Brandi’s first targets were about who’d you expect, too–Brandi says she’s tired of Rinna and Vanderpump talking about her, and wants to set a few things straight.

The most recent Brandi Glanville feud involved her well-publicized spat with LeAnn Rimes posting Christmas photos of her (Brandi’s) kids. It looks like those fences might be mended–which means that Brandi can spare attention for her other enemies. It’s been a few months since she called her former RHOBH co-stars “c*nts,” so she must have plenty of ammunition stored up, right? Listen for yourself, as the many-sided Brandi Glanville feud rages on! (Skip a little ahead, to 1:24, for the good stuff.)

“Those b*tches are cowards,” Brandi says, after claiming that she doesn’t get to have her voice heard despite being “talked about” in every new episode of RHOBH. “They’re gonna talk about people that can’t defend themselves, ’cause they don’t want to talk about each other. So,” Brandi begins, “I’m just going to address two things that were said about me, and then I will have my side out there, and they can f*ck off.”

Brandi’s opening salvo is for Lisa Vanderpump, who gets a slightly different name:

So, Lisa Vanderc*nt said that the problem with me is I wanted her all to myself, and I didn’t want her to be friends with anyone else….And the truth be told is the b*tch doesn’t like any of the other ladies at all, and she didn’t want to be friends with them….She hates Kyle, she hates Faye….So, yeah, b*tch…the case is, you don’t like anyone, and you needed a sidekick, and that was me, because I thought that you were all things amazing, and now I realize that you’re not.

As for Kyle Richards, Brandi is no more restrained:

That said, Kyle went on to say that I was the catalyst that ripped her and Kim apart. Yet, I was at Monty’s memorial yesterday, and she was not there….Here are the facts. The facts are that I am Kim’s friend, they have always had family problems, and it has nothing to do with me. Not anything….Apparently I [came between her and Lisa]. That’s what Lisa said….[But] of course they’re not talking. There’s only room for one Queen B. And her name is Yolanda, so back the f*ck off, b*tches.

As for a cast response, Lisa Rinna stepped in (and was widely re-tweeted):

Shut up @BrandiGlanville leave @LisaVanderpump and @KyleRichards alone. Use your podcast to educate and inspire people. Move on baby.