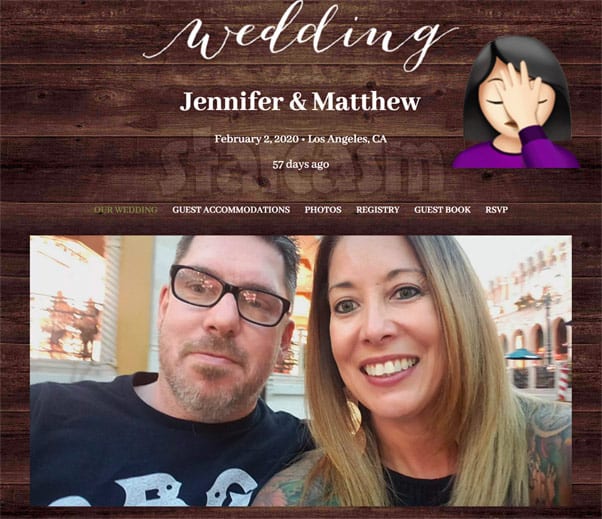 Amber Portwood’s ex Matt Baier isn’t about to let a little thing like national exposure stand in the way of his womanizing ways! As we were the first to report, the 48-year-old former Teen Mom OG star welcomed yet another child with his wife Jennifer Baier in January of 2019. Jennifer filed for child support a month later, and officially filed for divorce in December of 2019. But, by the time his estranged wife had filed for divorce, Matt was already six months into a relationship with another Jennifer!

As is often the case with Dirty John Appleseed’s relationships, his relationship with (new) Jennifer moved along quite rapidly. The couple created a wedding registry on The Knot and proudly announced a wedding date of February 2 of this year. I’m assuming Matt kind of forgot to mention that he was still married.

According to court records, Matt’s ex Jennifer received a default divorce disposition on March 4 — more than a month after the wedding date listed on the registry.

Speaking of Matt Baier’s wedding registry, it includes the story of how the couple met. It reads EXACTLY like every other relationship Matt has ever been in. Unfortunately, it includes another young child.

Here’s the couple’s story from the registry:

All it took was their eyes meeting for the first time. Matt and Jenn met at the 50th anniversary WSOP. On a break from playing the Big 50th tournament Matt grabbed Jenns attention and even though he was done with women forever he asked her out. That night they met up and the rest was history. They spent everyday following by each others side and fell in love. Matt asked Jenns daughter if he could have her hand in marriage and ****** happily agreed. Matt proposed to Jenn shortly after and she excitedly said yes. The two have never left each others side and are excited to be united as one. The two have joined lives and have already become a loving family. Matt and Jenn are looking forward to sharing their story of true love and will do so in a beautiful ceremony of marriage. Love is blind and has no barriers. Matt and Jenn have never felt love like this and look forward to celebrating their love on February 2, 2020 and bonding their love forever.

The World Series of Poker Big 50th tournament was at the end of May, beginning of June, 2019. The first photo of the couple together was posted by (new) Jennifer on June 22. That was followed by LOTS of photos of her (and her 11-year-old daughter) with Matt over the next month or so. Then, the photos stopped altogether.

My guess is that someone probably gave Jennifer a heads-up about the man she was engaged to. Or perhaps she decided to Google his name? Either way, it appears as though the relationship ended abruptly. Jennifer currently has her relationship status set to “single” on Facebook.

Jennifer shared a photo of Martin Luther King, Jr on Instagram in August, along with the following MLK quote: “I have decided to stick with love. Hate is too great a burden to bear.” She captioned the quote by writing: “This says it all. As much as I want to hate, I still forgive you.”

Potentially breaking up with Matt before getting married or having a child isn’t the only good thing going in (new) Jennifer’s life. She recently graduated with a bachelor’s degree in mechanical engineering and is currently working towards her master’s degree.

Getting back to Matt and (old) Jennifer… As we previously reported, Jennifer was seeking full custody of their son Christian, and was not seeking any sort of child support from Matt. According to the affidavit in support of request for summary disposition of divorce decree filed by Jennifer, she watched their son “full time” while Matt “never has had Christian.”

Here is Jennifer’s response to the section on the form asking what the proposed custody and visitation schedule will be for Matt:

No contact, Matthew has never been with Christian, I am the one raising him. Matthew has showed no interest. He is also financially unfit. I am asking for full primary physical and sole custody.

#TeenMomOG Amber Portwood's ex Matt Baier had a rough few years in Sin City! In addition to his wife (and mother of his 1-yr-old son) filing for divorce in Dec, he was also evicted twice & sued by multiple cash advance companies for money. #DirtyMatt ??‍♀️ https://t.co/KLiEjyVZIQ pic.twitter.com/BEqeUOpxb3

In regards to Matt being “financially unfit,” we previously reported on his multiple recent evictions as well as recent lawsuits filed by multiple cash advance businesses in Las Vegas.

It’s unclear if Matt has already moved on with another woman. Hopefully, he is still single and the current coronavirus pandemic restrictions will help prevent him from spreading to anyone else for a while.