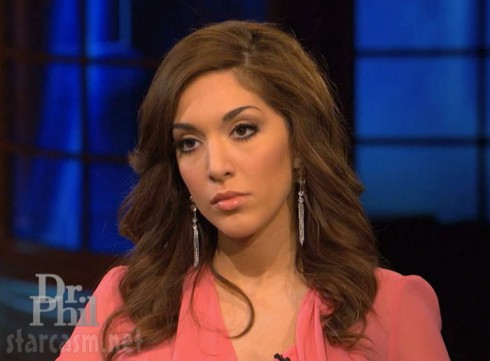 On today’s episode of Dr. Phil, former Teen Mom star Farrah Abraham appeared to defend herself against all the negative publicity she has received recently for a DUI arrest she fervently admits to and denies as well as the X-rated movie she made with adult f!lm star James Deen, which she reportedly intended to release later as a leaked sex tape, although Farrah says it was merely done for herself as a way to capture her at her sexiest. Needless to say, Dr. Phil does a lot of SMDBH (shaking my damn bald head) before calling Farrah out.

Here are some clips from the show followed by highlight quotes:

Farrah on her DUI arrest:

Dr. Phil: You would argue with a fence post. [And probably lose – ed.]

Dr. Phil: You say you shouldn’t have been given a DUI, and I say, “Well, you’ll probably get off,” and then you say, “Well I don’t care whether I do or I don’t.” You would argue no matter what I say because you have a chip on your shoulder and you want to argue instead of being accountable.

Farrah: I am accountable. I’m upset at how you, like, made this situation. It’s upset me.

Dr. Phil: Well, you’re upset because I asked questions you don’t have good answers for.

Farrah: I guess I don’t care.

Dr. Phil: Here’s the problem that you and I have, and that is that, perhaps unlike your mother, is I don’t care whether you have — whether you throw a fit or whether you don’t. I just ask you questions like an adult, and if you get upset, then that’s OK … You have an incredible sense of entitlement and when you don’t get your way then you get upset. Sorry.

I’m just realizing there is no way I can type up highlights from each clip because each clip is a highlight in its entirety! So, here are the rest of the clips with an intro for each and maybe some quotes 🙂

Farrah Abraham on her sex tape and how it came to be:

Some highlights from the interview not in the clips above:

“I did not make a p0rn video,” Farrah says, while admitting she hired a company who hired the male participant. “I made my own personal video. My personal video does not show any other male’s face. He is just like the prop in the background. It’s more about me. I’m celebrating my body, and I’m showing my feminine side. This is something that never should have been talked about publicly, because it was something that I personally wanted when I’m older. I want those sexy photos of me of my best year.

“I am not shopping the tape,” she continues. “If I’m going to release something because somebody’s already seen it, I really need to take into consideration my future, and yes, there is a money amount to that. I’m not going to just let something be out there for free that should have never been out there.

“I am not a p0rn star,” she maintains. “I will never want to date a p0rn star. I don’t want to have anything to do with it.”

“Do you worry that your daughter will see this tape?” Dr. Phil asks.

“I’m not worried about my daughter seeing this,” she says. “If she ever does bring it up, talks or asks questions or any of those things, I’m open. I’m honest, and we’ll deal with that.”

How Farrah and Debra are getting along now:

Farrah: You know what, that’s what I strive to be, and I think we should all strive to be the best people we can be.

Dr. Phil: How’s it feel to have gotten there?

Farrah: You know what? It feels pretty great.