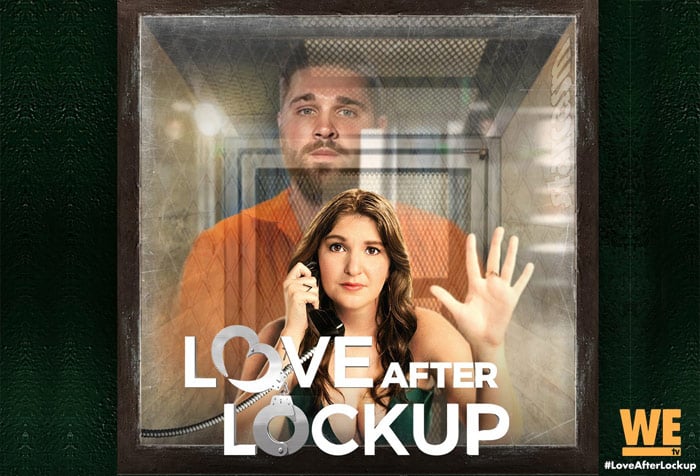 Love After Lockup‘s Johnna DiGrigoli dated her #hotfelon fiance Garrett Tanner for four years while he was in prison serving time for burglary, grand theft auto, selling stolen merchandise, possession of a controlled substance, credit card fraud, and more. It appears that her dedication may have been a poor investment because a new report indicates the couple has called off their May wedding less than a year after Garrett’s release.

The report comes from a post made on the Love After Lockup subreddit by user jclgrace yesterday. Here is her post in its entirety:

Possible spoilers here, although I have no idea what’s going on now…

I met Johnna at a bar last month. One of our friends brought her. She was pretty messy and trying to flirt with my fiancé. After my fiancé told her for the fifth time that he’s engaged (each time before that she said “oh that doesn’t mean anything.”) he pulled me over. After that she started talking to me…

HERE ARE THE SPOILERS

At this point I had no idea she had wrapped filming for a reality show, but we talked for about 20 minutes about how she had just called off her wedding. I really did feel bad for her. She told me about how he’s not the guy she fell in love with, he’s changed so much, and he’s falling back into old habits. That’s when she tells me that he’s hanging out with the people that got him in trouble before they met. I thought nothing of it and we kept taking. Again, I really did feel bad for her. She told me that was her first night out since they broke up and that it’s been so hard. THEN she tells me it’s all going to be on a reality show and proceeds to show me the trailer for Love After Lockup.

I haven’t spoken to her since, but my friend posted Snapchats with her on premiere night. Her (now ex) fiancé was not at that viewing party. For reference, they watched it at her parents house and my friend posted a video of her posing next to the tv at multiple points during the episode. 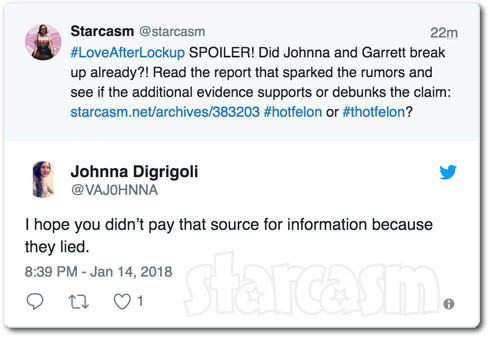 The story has so many random details that it seems very believable, but I wanted a little more information before doing a post about it. Although I could find no “smoking gun” so to speak, I did find evidence that suggests Johnna and Garrett have indeed broken up.

First, this couple absolutely LOVE posting photos and videos of themselves together on social media, and neither have done so — aside from older photos together with captions promoting the show — since at least December. The most recent I could find is a blurry video of a tipsy Johnna grinding on a “bad Santa” (that I assume is Garrett) posted by Johnna on December 23. I couldn’t embed the video itself, but here is a screen cap with an inset: 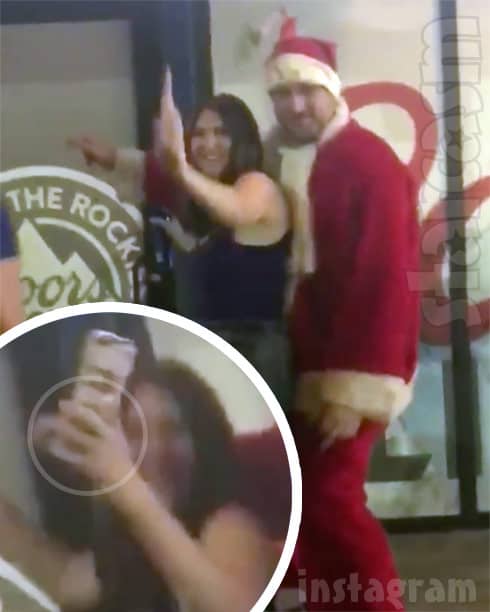 The entire video is a bit blurry and pixelated, so I couldn’t be sure if Johnna was wearing her engagement ring or not. However, blurriness and pixelation were not a problem with this photo of Johnna taken at a New Year’s Eve Party: 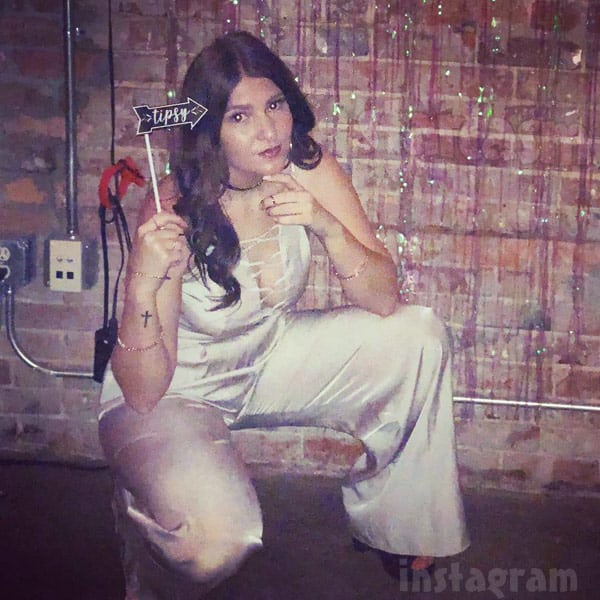 Not only is Johnna not wearing her ring, but I simply cannot believe that if these two were still together that they wouldn’t have been together for New Year’s Eve and posted numerous pictures! And, in case you wanted to make the argument that show producers might have asked that she not wear her ring to avoid spoilers about her engagement, not only was the engagement featured in the preview trailer, but both Johnna and Garrett still have photos and videos from the engagement on social media. As far as Johnna’s outfit, this is not the time or place for that discussion. 😉

The last little bit of evidence I’d offer before resting the prosectution’s case is a Facebook post made by Johnna just before the premiere of Love After Lockup:

If someone would’ve told me 5 years ago that dating a prisoner would lead to me being on a reality show I would’ve been like…yeah that sounds about right. ? No but really…being a prison wife is a prime example of life handing you lemons, but I did everything I could to make some bomb ass lemonade. From starting support groups, hosting get togethers, designing graphic tees and now being on TV, I’ve proven to myself that I’m strong af and capable of finding the silver lining even when it seems there’s no good in a situation. I want to thank all of my family and friends for the support as I put my life on blast for the world to judge. I hope everyone enjoys the show…tune in tonight at 10pm on WE tv #loveafterlockup

I’ve learned a lot about Johnna over the last few weeks, and it sure seems easy to read in between the lines of that post! Johnna is a diehard romantic, and she usually talks about her relationship with Garrett using NUMEROUS references to how amazing their love is, etc. There is absolutely NOTHING in that post that says ANYTHING about their future together or how love won out in the end or whatever.

So yeah, I think it is not looking good for Johnna and Garrett. What’s funny is that I’m so used to 90 Day Fiance that part of me keeps thinking: “Oh man Garrett broke up with Johnna before they got married? He’s going to have to go back to prison now!” No, dummy, Garrett is not on a K-1 release from prison.

Johnna seems like a real sweetie, so I feel kind of bad for her. But then again, she seems to have a knack for falling for not-so-great dudes so it could very well be that she saved herself four years of other potential heartache. Perhaps the combination of being burned by Garrett (if the break up report is true) and having it play out in front of a million viewers on national television will help Johnna be more aware of the flaws in her romantic decision making in the future and the end result will be that happily ever after she seems so desperate to find. And perhaps we will get to see it all unfold on the first season of the WE tv spin-off series Love After Love After Lockup! 😉

Meanwhile, you can keep track Johnna and Garrett’s relationship with new episodes of Love After Lockup airing Friday nights at 10/9c on WE tv!