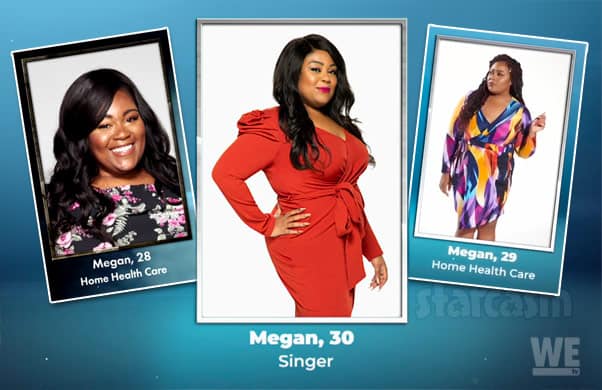 Friday night’s Love After Lockup: Life After Lockup season premiere had its fair share of shocking reveals, including an alleged prison closet conception and a new pregnancy, but nothing had fans’ collective jaw on the floor more than the apparent career change of perpetual love triangle victim Megan Nash!

After one season of Love After Lockup and one season of Life After Lockup as a “home health care” professional, the new season described Megan simply as a “singer.” The revised career description accompanied a photo of Megan looking the part of a musical diva as she poses in a snazzy red dress with one hand on her hip.

So, is Megan actually a singer? You can be the judge. Here is Megan transitioning into Meyoncé as she covers the Beyoncé song “Sandcastles:”

Obviously, posting a track of yourself singing Beyoncé doesn’t mean you have launched a new career as a singer — that would require actually making money, right? Well, it seems Megan might be working towards that.

Megan signed with Saac Entertainment back in July. The company doesn’t have a long list of clients — actually it only has two that I can find. Prior to bringing Megan on board, the company’s sole client was a rapper named Avrex. My guess is that we might be seeing a new Avrex track “featuring” Megan soon?

UPDATE – We nailed it! Click here to listen to “Lemons” by Avrex featuring Megan Nash!

Megan won’t be the first musician featured on Love After Lockup. Andrea’s felonious beau Lamar had a budding rap career as Baby Nucc Dog prior to his arrest, and Megan’s Niagara Falls fella Michael Simmons is also a rapper — supposedly. Oh, and Glorietta’s boo Alexander is a singer who has a few tracks available on SoundCloud.

Hmmmm… Perhaps WE tv should release a compilation album performed by cast members? It could be all songs about prison and/or love. I mean, who wouldn’t want to hear Alexander’s cover of “Folsom Prison Blues,” amirite?

To find out if Megan will try to push her new career by singing on the show, be sure to keep tuning in for new episodes of Love After Lockup: Life After Lockup airing Friday nights at 9/8c on WE tv!