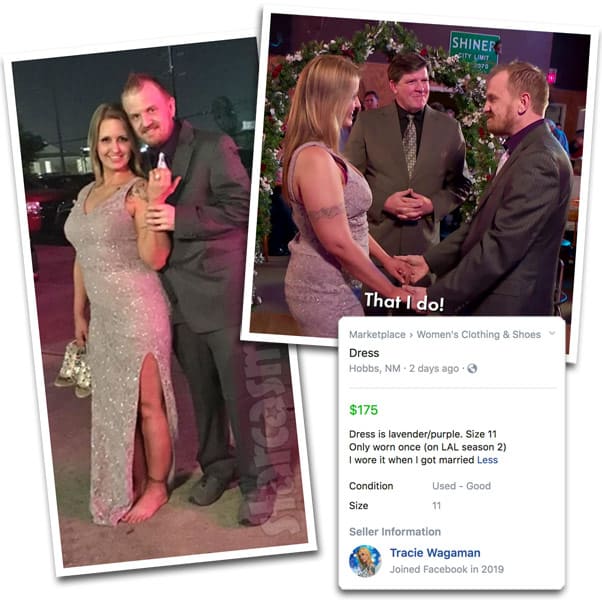 Here’s your chance to own a piece of reality show history, and it will set you back less than $200! Love After Lockup and Life After Lockup “goddess” Tracie Wagaman is selling her Houston saloon wedding dress for just $175!

Tracie shared the listing on Facebook Marketplace on Monday.

Here are the details from the listing:

Dress is lavender/purple. Size 11
Only worn once (on LAL season 2)
I wore it when I got married
Condition: Used – Good
Size: 11 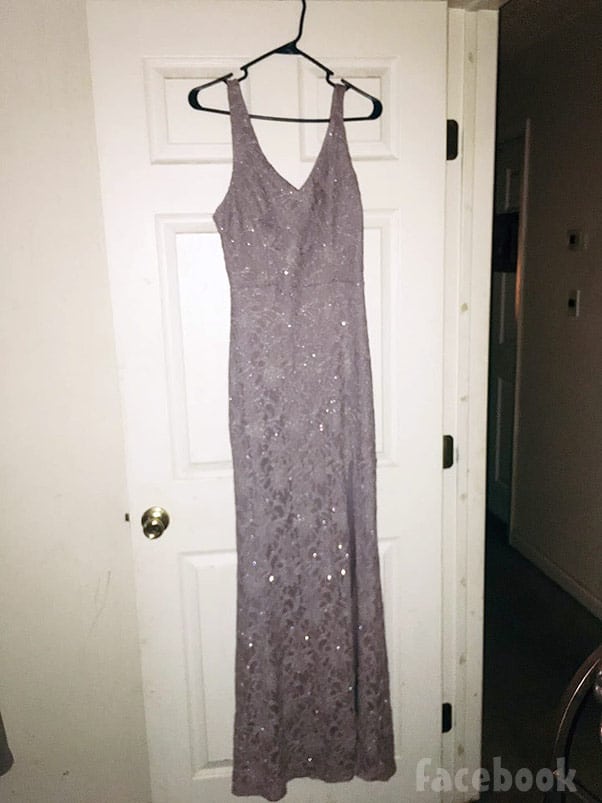 If you’re curious why Tracie only wore the dress once when it looks to be a dress that could be worn at any semi-formal occasion, it’s not that hard to figure out. Within 24 hours of wearing the dress, Tracie stole Clint’s rental car and took off. She was soon arrested again, and by the time she got out, she had lost A LOT of weight!

“I lost it in county jail,” Tracie explained soon after her release, along with an image of a dancing skeleton. “Got real depressed and lonely,” she added.

Tracie talked further about her weight loss in response to a positive comment on Facebook about her svelter appearance:

Ty so much! I got dogged out by so many ppl saying I was fat …and ugly. It’s not a beauty pageant…. just a show. Anyhow , I am now 45 lbs skinnier (which u will see on episode 9 or 10). But Clint likes me thicker. Ugh… I can’t seem to plz anyone. So I’m just gonna be ME! Have a good day.

In addition to the “wedding” dress, Tracie also has a pair of black high heels available for $10 as well as an iPhone 7 case. The case is purple and sparkly, so I doubt it is one of the cases that protected Clint’s oft-hurled phone.

If clothing and phone accessories aren’t your thing, Tracie and Clint are back on Cameo as well. Here’s a recent sample video they shared wishing a fan a happy birthday:

Unfortunately, Tracie might be selling off her wedding dress and more to help cover her legal fees. In case you missed it, she was arrested for felony drug possession in Texas last month. She was released on August 21.

#LoveAfterLockup #LifeAfterLockup star Tracie Wagaman was arrested for felony drug possession in Texas on Wednesday and is currently still in custody with bond set at $5,000. https://t.co/E2KPDrkhbi

Tracie’s husband Clint Brady was also arrested, but he received a lesser drug paraphernalia charge. We speculated in our post about Clint’s arrest that the paraphernalia was very likely connected to Clint’s legal medicinal marijuana use in New Mexico, speculation that Clint’s mother Alice seemed to verify on Facebook back in mid-August:

ALICE: [Tracie] is still incarcerated and my son is out AND was released the next morning on his OWN recognizance! No bond was set be[cause] this is a very minimal charge! It was a marijuana pipe ONLY, NOT ANYTHING ELSE! Let me give EVERYONE the facts and set it straight! He has his medical marijuana card in New Mexico where he lives! Unfortunately, any marijuana paraphernalia is STILL illegal in Texas where they were at the time…

COMMENT: Hope Clint is doing ok. This situation most be real hard him on him (Tracie in jail again)

ALICE: It is hard on him AND all of us too…. I HATE hard core drugs with a passion! They ruin lives and hurts the family tremendously… It’s truly sad and heartbreaking …

COMMENT: What happened to Tracie Wagaman? How did she end up in Texas?

ALICE: She visited her son every two weeks in Texas… They were in Texas when this happened..

We continue to sincerely wish Tracie and Clint the best! I remain hopeful that her recent arrest (and assumed relapse) won’t be enough to derail their happily ever after!